“Bring breast awareness back to the workplace”

Remember Rethink? With all their huh-huh-boobies advertisements? Rethink, who thinks that the main focus of “breast cancer awareness” should be sexualised breasts and men? They’re at it again. This time, they’re exhorting us to “Bring breast awareness back into the… Read More ›

Jim Beam demonstrates just how much men want to hate us

As tigtog said, people are up in arms about the “The Neighbours” commercial from purveyors of bad bourbon and toxic masculinity, Jim Beam.

So says the advertisement below for skin creams. While the cosmetics industry is still full of nasty beauty myth tropes, at least it’s no longer quite as condescending as this. 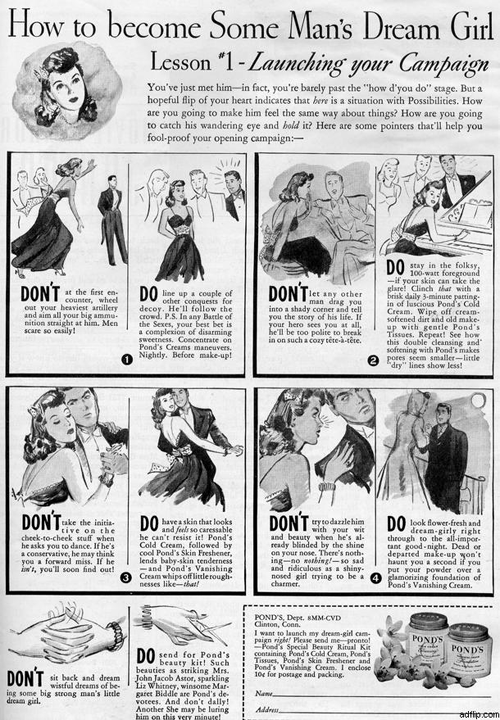 This phrase just makes me want to hurl: “wistful dreams of being some big strong man’s little dream girl”. Infantilising much?

Update Friday 9th May: The Guardian has taken down the blog post and article featured in the following post. The original report has been challenged strongly and no-one else has come forward to support the allegations. I will leave the… Read More ›

And again, a ‘breast cancer awareness’ ad misses the mark completely. This ad is from the pinkified crazysexycancer campaign “Rethink”, sponsored by a femirazor company and fashion, makeup and hairstyling product manufacturers, among others. You may remember Rethink from such… Read More ›

Headdesk of the day: Poteez single-use disposable potties. Can I see a possible role for having one in the back of the car for emergencies? Sure, though you could just use a regular potty or a bowl or jar. But… Read More ›

Y’know, I don’t find this offensive. It’s clever, not least in its rather pointed metacommentary on the way that advertisements for menstrual products have relied on euphemisms since forever.

Hey, you know that company that feminists are slavering over, because of all the wonderful work they’ve done for women’s self-esteem, especially average-sized middle-class conventionally-beautiful able-bodied women? The one that talks about how women can be strong, independent, and confident?… Read More ›

Tragedy of the Closet

There’s been a lot of ink and electrons devoted to Brokeback Mountain, but here’s what I think is the best review (major plot spoilers alert)- An Affair to Remember from the New York Review of Books’ Daniel Mendelsohn, pointing out… Read More ›