Our guest hoyden today is Tasmanian author Tansy Rayner Roberts, who has the second book of her fantasy trilogy released today! woot! 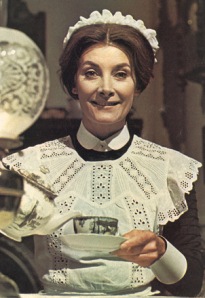 as Rose in Upstairs Downstairs

I can’t remember not knowing who Jean Marsh was. She played Rose on Upstairs Downstairs, and even though I was rather young when I first watched the costume drama to end all costume dramas, I was also keenly aware that she didn’t only act, but was one the co-creators and writers of the show. Later, I fell in love with the House of Eliott, created and written by Jean Marsh and her best friend (now Dame) Eileen Atkins. House of Eliott wasn’t just a costume drama, it was a drama about costumes, with a focus on two sisters who set up their own fashion house in the 1920’s.

Being a Doctor Who fangirl from even earlier than I was a costume drama fangirl, I was also aware of Marsh’s appearances in two classic lost black and white stories, playing Princess Joanna, sister to Julian Glover’s Richard the Lionheart, and later Sara Kingdom, a ruthless soldier from the future who guns down her own brother out of political loyalty.

as Bavmorda in George Lucas’s Willow

In the 1980’s, Marsh played two iconic evil queens: Bavmorda in George Lucas’s Willow, who sends her forces to destroy an innocent baby and is screechingly furious when her sexy chainmail-clad redhead daughter Joanne Whalley leaves her side to marry Val Kilmer (that’s how *I* remember the movie); and also a science fictional version of Morgaine le Fey in Doctor Who: Battlefield.

as Morgaine le Fey in Doctor Who: Battlefield

No one plays villainous feminine power like Jean Marsh. When she points a finger at you and her eyes glow red, you damn well cringe at her feet.

Of course, this is just a handful of the achievements of a magnificent, fiercely talented woman’s life – the few roles that most affected me, and that drilled her into my brain as the personification of evil and writing success, rolled in together. She won an Emmy (and received two Golden Globe nominations) for her performance as Rose in Upstairs Downstairs, she has appeared in the West End and Broadway, and appeared in shows such as The Saint, Hawaii Five-0, The Love Boat, The Twilight Zone, Murder She Wrote and Holby City.

Jean Marsh was married once, briefly in the late 50’s (to Jon Pertwee!) but never bought into the idea that marriage was an essential to life. 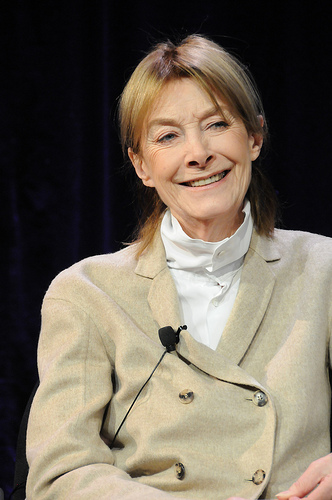 Listening to her being interviewed in recent years, on the Battlefield DVD as well as in the Big Finish audio plays (where she reprises her role as Sara Kingdom despite the fact that the character famously died after only a handful of episodes in the late 1960’s) I was struck by her wicked sense of humour. Her eyes sparkle as she tells an anecdote about how she kept her lunch in the compartment of her belt that was supposed to hold a ray gun, (“I wasn’t issued with a BBC raygun!”) or how she and Julian Glover tried to sneak some incestuous vibes into a children’s TV show to make it more interesting (“I know what you’re up to!” said producer Verity Lambert).

I always knew that Jean Marsh was talented, and scary, but I suppose if I assumed anything, it was that she was like Rose the parlour maid: meek, judgemental and uptight, or possibly like Queen Bavmorda: sinister, powerful and vengeful. What a delight to discover that she is an impish old lady who thoroughly enjoys her life, and her work, and being sarcastic when people deserve it.

“I was in a pub and these two young men came up to me. They said I looked like I’d had a hard day. I realised they’d just been watching a repeat of Upstairs, Downstairs. I said, ‘That was filmed 40 years ago, anyone would look tired. And by the way, shouldn’t you be at school?’ ”

House of Eliott was one of Tansy’s inspirations for the Creature Court, a fantasy trilogy about a dressmaker who is pulled into an unseen world of night horrors, sky battles, bloodthirsty court politics and naked people.