Vice recently posted a fashion spread today called “Groin Gazing.” It features a series of photos by Claire Milbrath with styling by Mila Franovic, and the photos are framed tight on the clothed junk for your viewing pleasure. The models are identified by the type of guy they depict, such as “The Boyfriend” or “The Artist” or “The Businessman,” and even “The Boy Next Door.” And taken together, they are also exactly the sorts of men, anonymous, real, and imagined that a woman (or man) might lust after.. But what makes it remarkable is that, for a moment, you can indulge what it would actually be like if most of the photographs you saw in advertising or fashion were meant to cater to your desire. Not your desire to be more beautiful, or thinner, or more glamorous, but simply your desire for the opposite sex. This is something men take for granted. This is something women must overlook when watching popular TV shows and movies (*cough*gameofthrones*cough*truedetective*cough) that purport to be for everyone, and then instantly betray that when it’s time to show naked bodies, which are largely female, and which are nearly always and only filmed for an assumed hetero male viewer.

This discussion at Jezebel also made me think about how a big part of feeling desire is about feeling desired. Years ago I read an interview with a feminist stripper and she was asked about the difference between doing lap dances for male and female customers and she said that male customers tipped more. She put that down to men being more able to believe the fantasy that the stripper really, truly desired him. Female customers, she said, enjoyed the lap dance but understood that the stripper was working, that it was her job to pretend. But male customers believed the stripper wanted him and it was exciting and he tipped accordingly. What about when women watch male strippers instead? It’s quite difficult to objectify men. As John Berger (Ways of Seeing) says:

Men act and women appear. Men look at women. Women watch themselves being looked at. This determines not only most relations between men and women but also the relation of women to themselves…

.. The surveyor of women in herself is male: the surveyed female … thus she turns herself into an object-and most particularly an object of vision: a sight.

Might the patriarchal history of objectifying women mean that, for women, feeling desirable is an especially important part of feeling desire? Women often complain that mainstream images of men aren’t particularly erotic. Maybe it is partly because we don’t see evidence of desire for us in those images of men? Yes, male model, you look hot and you’re making serious bedroom eyes at me in this photo but I see from your crotch that you’re just posing. We know it’s all pretend. We don’t get the kick of excitement that is knowing this person is excited too, and that they’re excited about us.

See below the line for an example of these “groin gazing” photos. (Sorry about the lack of diversity – only slim white guys were used in the VICE fashion spread). 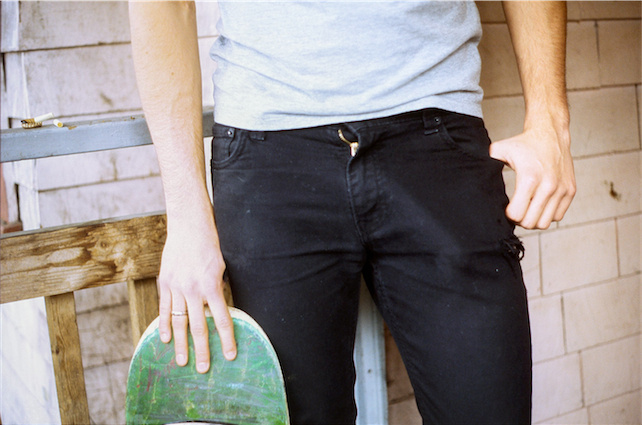