1988 was the same year that Die Hard, where Rickman played the villainous Hans Gruber, came out. 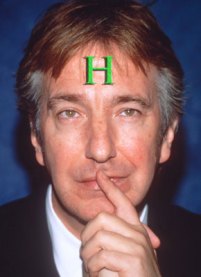 I’m trying, but I can’t really imagine what a Rickman Rimmer might have been like, not even after learning that he shared a house with comedian Ruby Wax in the early 80s. I know he’s a more flexible actor than one might think from looking only at his film career, and has won awards for parts he’s played in stage comedies, but I just don’t see him as a comic actor because I just haven’t seen him being a funny ha-ha comic actor. Imagine how Rickman might be viewed differently by the showbiz sector now if he had ended up playing Rimmer back then.

Apparently Hugh Laurie also auditioned back then for Red Dwarf, for the part of Lister (as did Alfred Molina). A bit of reading elsewhere indicates that although the producers were keen to use Laurie and Rickman for Lister and Rimmer, they really needed actors willing to commit to more than one season, so they ended up going with Craig Charles and Chris Barrie instead.

I’d better stop there or I’ll end up down the “What If?” rabbit tunnel for the rest of the day.