After the murder of nine people at a Bible study group in a church in South Carolina, USA, in a white supremacist terrorist massacre specifically targeting black Americans, many people’s patience has run out with the display of racist symbols condoned by government. 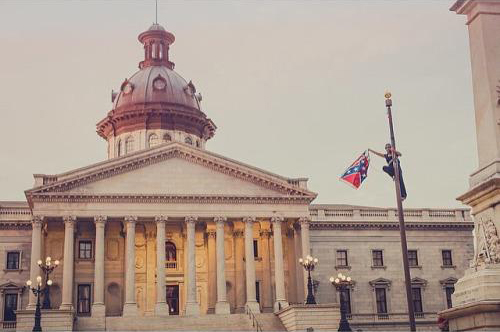 A few days ago, in a classic activist act, filmmaker and musician Bree Newsome used a climbing harness to scale the flagpole outside the South Carolina State Capitol building and remove the Confederate flag that flies there. She was arrested, and is facing charges with a maximum penalty of three years’ imprisonment. This is only the beginning of the risk a black woman faces for making herself this visible in her activism.

A great deal is being said about the many ways that this was a massively symbolic action, but I would like to add one small one. People who are waiting for justice, who are fighting for justice, spend a lot of time being told that it will come. We all need to find more visible ways to reply, “not fast enough”.

Via Democracy Now, here is an extended interview with Bree.

And here, via Other 98 is a round-up of some fab tribute art.