In the fifteenth century England was governed by a loose association of noble families, led by a King who may or may not have gained his crown as the most direct male descendant of the previous King. The two ways for instability of succession to happen were for a king to have not enough sons, or for him to have too many. The competing claims of the descendants of Edward III’s numerous sons resulted in the extended civil war known as the Wars of the Roses. Women at this time were pushed out of direct contention for the throne, no matter how good their claim, but the wise and capable ones knew that it was their influence that could make the difference to the survival of their families.

At the age of fifteen, Margaret, daughter of the Duke of Anjou, otherwise entitled the King of Naples and Jerusalem (not that anyone thought he really was King, but it was a hell of a title) was sent to England to marry the young King Henry VI, in order to seal a treaty, and give Britain and France a break of years of debilitating and exhausting skirmishes.

In courage, courtship and proportion,

But all his mind is bent to holiness

The three phases of Margaret (my actors from the forthcoming production)

Margaret was forced to take an active role first in politics and then in military matters, as it became apparent that when her husband was incapable of rule, the power vacuum was too easily filled by his enemies. Of course, this led to accusations that she was power-hungry and unnatural, a “she-wolf of France”. She was certainly ruthless in support of her own interests, but when you are the mother to a vulnerable son there is no other way to be. After her husband was deposed and he and their son murdered, she returned to France and took no further interest in the English wars that had made her their reddest rose.

Think therefore on revenge and cease to weep.

But who can cease to weep and look on this?

Queen Margaret is the sole Shakespeare character to appear in four of his plays, the three parts of Henry VI plus her disconcerting appearance in Richard III. She is a vivid, even magnificent figure, transcending the role of villain to be ruler, warrior and prophetess. Her eloquence is equally breathtaking when seducing Lords to her cause, rallying her troops or excoriating her enemies.

The Northern lords that have forsworn thy colours

Will follow mine, if once they see them spread. 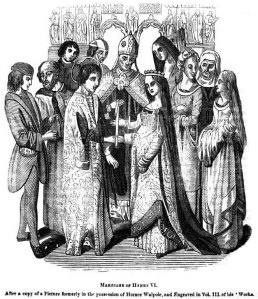 It is rumoured that Cersei Lannister is based on Queen Margaret.

Bear with me, I am hungry for revenge,

And now I cloy me with beholding it.

You can listen to a series of 5 ten-minute podcasts of me talking to Sylvia Rosenblum on Eastside Radio about Margaret in her historic and stage versions. Just play back previous episodes from 8 June. The final one will be broadcast on 6 June, then all 5 will be put up as downloadable podcasts.

Read more about the Margaret of Anjou Project on my Shakespeare TwentyScore site.

There will be a Sydney performance of Margaret of Anjou (an amalgamation of the Margaret portions of Shakespeare’s history plays), in staged reading form, on the 8 July at the University of NSW, directed by me and starring a cartload of local talent. You can book tickets here.