Home › Culture › media › On Being Fat in Public, and Beyond Responding to Hate

On Being Fat in Public, and Beyond Responding to Hate 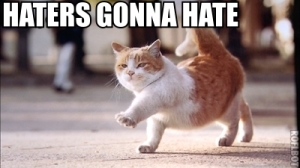 Crossposted at my personal journal

So, most folks with some familiarity of the fat/size acceptance blogosphere will be aware of the recent furore involving Marie Claire (US) publishing a blog from a journalist about CNN sitcom Mike and Molly (a show which focuses on an fat couple who meet at an Overeaters Anonymous meeting). Apparently the reason was that there has been some issues raised about the volume of fat jokes on the show (having never seen it, I can’t comment). The path the journalist took in the blogpost in question was quite different. She chose to focus on the fact that she finds the sight of ‘obese people’ (as opposed to some of her friends who are ‘plump’ – apparently signifiers of her not being “a size-ist jerk”) kissing as something which would ‘gross her out’, along with “watching a very, very fat person simply walk across a room”.

In something which was a pleasant surprise (sad that it should be such, in my view), there has actually been a significant backlash from a lot of Marie Claire’s audience; the comments to the post are predominantly focussed on calling out the author. Similarly, there have been some great responses both from within and outside of fat activist circles (see the bottom of the post for some links), and there has been a good deal of discussion about responding to the author v. responding to Marie Claire. It has come out that the author has a history of ED and related body dysmorphia, and there has been some acknowledgement on her part that this may have had an impact on her views here. Others have raised a fairly valid concern that Marie Claire has made the larger error here in giving that sort of viewpoint, however prompted, such a large stage (and honestly, I have no patience for ‘it’s just a ladymag’ arguments, because it dismisses the very large and predominantly female readership these magazines have). I haven’t mentioned the author’s name here, because really, it’s not about her. She’s not alone in her views (and comments on some of the stories about this bear that out pretty clearly), and although this particular article is one of the more blatant in terms of its expression of fat hatred, fat hate is everywhere.

Being fat in public is, so often, a political act, but just as often it’s an almost inescapable act. As a woman of colour who is often read as white, and a queer woman in a relationship with a man, these aspects of my identity are, in many cases (though not all, because so often it’s heavily dependant upon the ‘audience’), not as front-and-centre visible. My fat, however, is always here, with me. Even at my smallest adult size, which was directly related to a close personal relationship with amphetamines (which is likely not unrelated to my current size, given what that stuff does to one’s metabolism), which was around a size AU 14 (US 10-12), I heard ‘fat slut’ and ‘fat bitch’ and mooing sounds coming from cars driving past me on the street at a horrible frequency. That frequency has only increased as I’ve gotten larger; though I’ve been steadily around a size AU 22-24 with occasional drops below that due to illness for the last 5yrs or so. I’ve had co-workers, friends and family members express quite a bit of really ugly sentiments in the guise of ‘concern for my health’. I’ve had people turn my frustrations about the inability to find clothing of a quality and style I prefer in my size into an obvious indicator that my fat is making me unhappy; despite the fact that I’m usually pretty upfront about where the problem with clothing lies (hint: it’s not me). I’ve had doctors ignore legitimate health concerns and lecture me about things like blood pressure and cholesterol before actually testing it (at which point one discovers my numbers are pretty damn perfect, particularly for a family history of high BP, but that’s not the point, because even if it was bad, these doctors have assumed it was bad without measuring it).

One of the things I loved seeing in response to this whole thing was my Twitter stream filled with tweets from some of the awesome fat ladies I follow talking about how they were going out (to the shops, to the beach, etc.) to be fat at people. I myself spent part of yesterday at Stonefest, being fat at people and enjoying a music festival. I even had one of the official folk doing the wander around videotaping the crowds wander over to where I was sitting on the grass and prompt me to wave at the camera, so there is video evidence of me being fat in public somewhere (with a head, even!). I love outfit posts on fatshion blogs; I love things like Lesley’s Museum of Fat Love; I love posts talking about the kind of exercise we like and that doesn’t revolve around shame about our fat. Because Marianne is right – it shouldn’t always be about the haters. We are worth more than that.

This is not a new idea; it’s something I’ve seen in various social justice circles; in feminist blogs and woc blogs. A good takedown of haters can be awesome, so I’m not intending this to be a criticism or a ‘you’re doing it wrong’; takedowns and the like can be an outlet for the legitimate anger that comes from existing in a society that marginalises you, and they’re an important part of responding to that marginalisation. But so much responding to hate can burn folks out, and working positively and talking positively for ourselves can be restorative. It can be beautiful. It can be powerful.

It’s November, and I’ve seen some folks are doing NaBloPoMo (National Blog Posting Month). I’m not sure it’s going to work for me this year what with planning an interstate move, but I’m considering making a concerted effort to post more, and to concentrate my posting on that kind of restorative stuff, and joining in on conversations that are for us and about us, not just in terms of fat and size acceptance, but across the different spectrums.