This is a terrific campaign against rape myths, and Rape Crisis Scotland have made this downloadable as a print-quality PDF:
The postcard front: 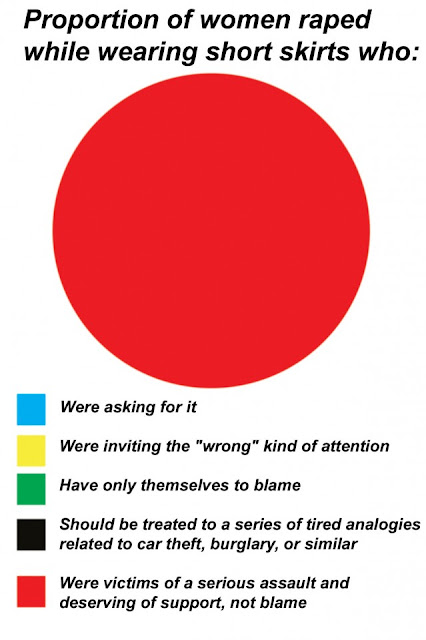 Proportion of women raped while wearing short skirts who...

Text-graphic description: A circle in the style of a pie chart is fully coloured red. The key reads as follows
Proportion of women raped while wearing short skirts who:
[blue] asked for it
[yellow] were inviting the “wrong” kind of attention
[green] have only themselves to blame
[black] should be treated to a series of tired analogies related to car theft, burglary or similar
[red] were victims of a serious assault and deserving of support, not blame 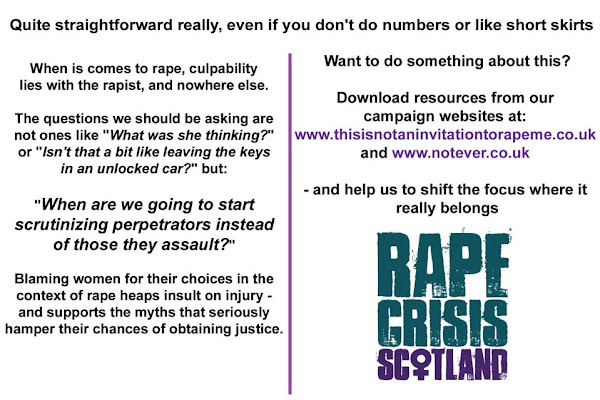 Quite straightforward really, even if you don't do numbers or like short skirts

Quite straightforward really, even if you don’t do numbers or like short skirts

When it comes to rape, culpability lies with the rapist and nowhere else.

The questions we should be asking are not ones like “What was she thinking?” or “Isn’t that a bit like leaving the keys in an unlocked car?” but:

“When are we going to start scrutinising perpetrators instead of those they assault?”

Blaming women for their choice in the context of rape heaps insult on injury – and supports the myths that seriously hamper their chances of obtaining justice.

Want to do something about this?

Download resources from our campaign websites at
www.thisisnotaninvitationtorapeme.co.uk
and www.notever.co.uk
– and help us shift the focus where it really belongs

Like Loading...
‹ 38th Down Under Feminists Carnival is Up!
Signal boost: help Skud preserve and disseminate knowledge of Australian music ›