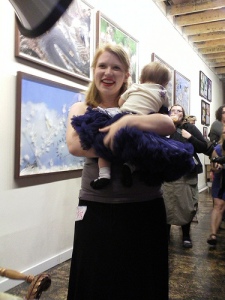 Remember this? A breastfeeding portrait of pornographer and feminist performance artist, Madison Young that led another pornographer to accuse her of exploiting and sexualising her baby? Well, Tracy Clark-Flory has just interviewed Madison Young over at Salon on the whole controversy.

Why is the issue of sex and motherhood such a potent subject?

People obviously have a lot of issues around moms, regardless of whether their sexuality is documented on camera. Just Jane Smith having a sex life and having a kid and being out about it is controversial.

I like to make art about what’s going on in my life right now, and my child is totally consuming my life. Even when I’m not with her, my identity is affected by her existence. She’s my inspiration for basically everything that I do now. People would tell me before that everything would change when I had a kid, but I thought they meant, “You’ll never do adult film again” or “You’ll never make art again.” It’s not those kinds of things but rather why you’re doing it or how you do it.

We’re creating our own family, in our own way, instead of feeling like we have to move to the suburbs and have nine-to-fives and give up all that we are because we have a kid.

Let’s talk about the controversy over the breast-feeding image.

What was interesting was that people were projecting all these fears and hang-ups that they have onto that image. So I think there’s obviously some conversation that needs to happen around it, and hopefully we can create some safe spaces for those conversations.

That’s why when people started using the p-word [pedophile], it just seemed so incredibly loaded and dangerous. As a mom, you’re constantly worried: Am I doing the right thing? Am I giving her enough love? Should I be here talking to you instead of being with her right now? It is gut-wrenching to leave her when I go to work every day. And then you feel like you’re not doing as good of a job at work because you’re thinking, “I have to hurry home to my child!” These are things that every mom, especially every working mom, deals with. It’s really challenging on top of that when you have numerous articles and comments from strangers about how you’re not doing a good enough job parenting, because you already have your own anxieties around that anyway.