Hoydens are aware of all Internet traditions! But we share our hard-won cultural knowledge!

I first came across the phrase on USENet, where some people described their (old-skool) trolling efforts as “Internet Performance Art”, but the IPAs who were actually admired (and much imitated) simply had an obvious stage/net persona which created entertainment for other users just for the fun/challenge of it – James KIBO Parry is probably still the best known of these digeratis, although snopes (who later moved on from Internet Performance Art to providing the repository of urban legends known as  snopes.com) comes close. For those who weren’t there, imagine mostly less intense predecessors of Stephen Colbert, doing it all in ASCII plain-text.  Typing through deep snow uphill both ways was possibly involved.

There have been some journallers/bloggers who carried on in this tradition (the late Al Weisel, who blogged as Jon Swift, is one sadly missed example of brilliance). There are quite a few commentors on various forums who play around with personas too – we have had irregular visitations on Hoyden from The Devil Drink over the years, for instance. But it seemed a quieter thing on the Web than it had been on the ‘net. 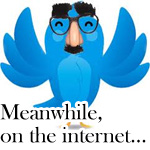 Until Web 2.0 and Twitter. Now there are more Twitter Performance Artists than you could poke a stick at, and given that I started writing this days ago, it’s ended up being rather timely since Qantas let a troll/parody account get them overexcited this week.  Here in no particular order are some of the fake/parody/fictional-character accounts I follow:

You’ve heard her side, now hear mine. I’m not a bad guy. I did what I had to do. TRUST ME.

I killed Voldemort, now I deal with fame and post-traumatic stress with booze. Don’t pretend you don’t know who I am.

You will still obey the beard! Speaker or not. ORDER!

Just like a character from the classic TV series Yes Minister!

Redefining the world by redefining our lives.

Trust me, I’m a doctor. This is a parody.

This page exists to get BP’s message and mission statement out into the twitterverse!

My name is Sherlock Holmes. My life revolves around crosswords, pub quizzes and being a consulting detective. Well… the last one I made up.

I am an ABOMINATION!

I’m a Time Lord, I wrote the book on resurrection (ask jesus), I love traveling (through time) and meeting new people. #parody account (not Matt Smith)

Queen, Head of the Commonwealth, Defender of the Faith, wife of the DoE, mother, grandmother and author of http://www.amazon.co.uk/dp/144473895X (fictional)

Leading Qantas Airways to its biggest disaster yet, and then to the next. Of course this is a parody account.

The Galactic Empire has been getting a bad rap recently. We’re here to set the record straight. DeathStarPR@gmail.com

N.B. a few of these are a bit new.  I haven’t seen any horrible marginalising crap as yet, but I make no guarantees for most of them.  Let me know if you see any.

This is an open Internet Performance Art thread. Links to other IPAs well and truly accepted!

If sharing an image: please post a link to a FULL webpage, rather than a direct link to an image only – that is, no URLs with .jpg, .png, .gif (etc) on the end. This makes our admin image magic quicker and easier. Just copy and paste what’s in your URL bar, and we’ll go fetch the embed code. **If you post the embed code, it will be automatically stripped out.** Thanks!

Fab. U. Lush. that’s totesalutely my name, my game, and my hat size.

Like Loading...
‹ Outland Open Thread: Episodes 1 and 2
Dear Hollywood: why didn’t you tell me more about Jack Black’s Gulliver’s Travels? ›