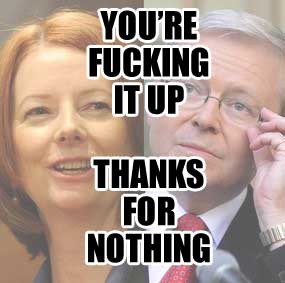 Honestly, I’ve not got much to say – I’ve been shocked by the lack of judgement or restraint shown all round. There simply doesn’t seem to be enough people there willing to calm down and keep their eye on the electoral numbers and just get on with governing, which up until last week I really thought they’d been doing reasonably well.

I just wish Labor as a party could put more people into Parliament who know how to tell their arse from their elbow. Living in a country where all but one polling organisation is owned by a media conglomerate doesn’t help either, of course – the blatant self-interest in their talking up the significance of mid-term voting intentions is clear.