Home › Life › Only in Newtown? 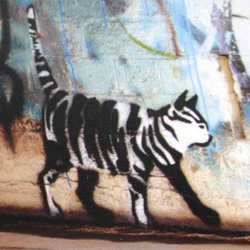 A photo I took of some street stencil art a few years ago – this stripey cat is all over Newtown and Enmore and a few examples in surrounding suburbs too.

Mohawk Snake Guy. On a skateboard. Moving too fast for me to get my camera out in time.

I shall have to lurk near one of the Stripey Street Cat stencils and see if I can catch the perfect shot of him against the painted walls, maybe, one of those mythical days when I have loads of free time.

I did manage to get the rest of the family (we were eating out for Sprog the Younger’s birthday lunch) to see that indeed he was wearing a large python looped around his torso and over one shoulder while zooming north on the other side of King Street, and that the Mohawk was sculpted to dizzying heights. Feral sk8er punk seems like quite an ambitious cross-culture style, but he was pulling it off.

At least we were far enough away that we didn’t have to pretend to be Newtown-cool about such a sight. Because it’s the first week of HSC exams and she had three exams scheduled this week (including tomorrow) we hadn’t planned any big birthday celebrations this year, but it is a landmark birthday, so thanks for making Sprog’s 18th extra-memorable, Mohawk Snake Guy!