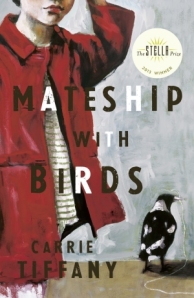 Cover image: half seen child in a red coat over a white and grey striped dress near a magpie with a long white string in its beak against a greyish backdrop.

On one farm in a vast, ancient landscape, a collection of misfits question the nature of what a family can be.

If not for life interfering I would have read this book in one sitting. I found that it had an easy flow that was soothing to read and get carried away in. Set in the late 1950’s it weaves in and out of the stories of Harry and Betty, neighbours on the outskirts of a small town.

Harry is a dairy farmer, wise in the ways of cows, yet naive in the ways of people. Betty is a local nurse and the proud and protective single mother of two children Michael and Little Hazel. The story explores the relationship Harry and Betty, with a supporting cast of children, friends, kookaburras and cows intertwined. The family of kookaburras and herd of dairy cows are important characters in their own right. In many ways the characters of this novel reminded me of many of the people I encountered as a child. Men who spoke little but knew a lot, women who made do, watching kookaburras, waiting to hear their laughter, hanging out and going exploring with dogs.

I liked the attention to detail in this book and later found, via another review, that it was because Carrie Tiffany undertook extensive research. But the book never feels bogged down by detail, rather her research is used to skilfully build up the characters and plot. It lends the book a sense of realness. I also discovered by reading other reviews that I had missed or not thought important some of the aspects of this book that might affect how others read and enjoy it. Such as this from 1GIRL2MANYBOOKS (read her whole review)

Firstly, this book is about sex. Not a lot of actual sex but thinking about sex, reflecting on experiences, writing about sex, talking about sex, informing about sex. … I’ve heard it described as overtly crude and disgusting and I was told that I wouldn’t like it. My husband (who has read her first novel) read this a couple of weeks ago and I asked him if there was a lot of sex in it. He shrugged and said kind of, but it’s all talk. It isn’t like those books you read with the ‘artistic’ covers that I know are really just soft porn.

There is a lot of talk about sex. But mostly it is sort of 1950’s ‘Women’s Home Annual’ style talking about sex rather than the more graphic descriptions that you see in many modern novels or in the Literary Review’s Bad Sex Awards.  But some readers may be uncomfortable with it nonetheless.

This reviewer felt this novel hit some wrong notes.

Helen Elliott feels that it may be

“just be the sweetest book about sex you will ever read.”

I’m somewhere in between. I enjoyed it, but would I have given it the Stella Prize? I don’t know. It certainly fits well with the other novels on the long and shortlists and is a great example of writing about Australia with the author’s knowledge and love for her subject showing through. I’m not at all sure that I know enough about literary conventions, writing, criticism and so forth to be judging prizes and not surprisingly no one has asked me to.

But I do know what I enjoy reading, and this book fit the bill. I will also be finding and reading Carrie Tiffany’s first novel ‘Everyman’s Rules for Scientific Living’ and also keeping an eye out for the book which gave this novel its name ‘Mateship with Birds’ by Alex Chisholm (1922) which Tiffany says you can still sometimes find in second hand book shops and charity stores.

Published by Picador. Panmacmillan.com.au Available as an ebook in epub format.

I am reading through the Stella Prize Longlist from 2013 for the Australian Women Writer’s Challenge 2014. The list can be found here.
I have reviewed The Sunlit Zone, Sea Hearts, Like a House on Fire, The Mind of a Thief and The People Smuggler: the true story of Ali Al Jenabi, the ‘Oskar Schindler’ of Asia; by Robin de Crespigny.