Home › Sociology › gender & feminism › If Gillard is replaced, what does it mean to the rest of us?

If Gillard is replaced, what does it mean to the rest of us?

It’s on again. And it’s been on multiple times this year: repeated attempts by the media and some parliamentary hotheads to convince us that the PM should be rolled and replaced by a bloke.

If this was to happen before September (or if she stays, and the Libs win), what does it mean for women in Australia?

I’m sure there is no need to tell you that the PM is on the nose for many sections of the Left. Many of us are ambivalent. Just as she made us all punch the air with the speech which is going down in history as “*the* misogyny speech”, her government changed the law to further disadvantage single mothers. They commissioned the Gonski report, then announced their intention to take funding away from tertiary education. To feminists, it seems that with one hand she giveth, and with the other she taketh. I’m frequently bitterly disappointed by Gillard and the policies she supports. Unfortunately, some Gillard opponents think that you are either For her or Agin her, and if you’re Agin her (politically) this can be separated completely from any feminist issues. This simplistic view fails to take into account the damage done to women if Gillard loses the September election or is replaced by a man from her own party before that. It now appears that damage will be inevitable.

Why do people talk about the PM in terms of weddings and proposals?

Australians have had a hard time coming to terms with the first woman Prime Minister. If you’re one of those cheery souls who genuinely doubt entrenched sexism still exists, you might want to put on a hazmat suit and read for a while in the comment threads of any of our news outlets. There’s no shortage of both men and women in these fora, or just in the pub or at the tram stop, who maintain that they’re not at all sexist but the PM is just incompetent, for some reason they just can’t explain properly, well they just don’t like her…et cetera.

And so many of the cartoons, comments and other references to Gillard make the point again and again that, by the way DID YOU NOTICE SHE WAS A WOMAN? A FEMALE TYPE WOMAN? As if that notion had to be reinforced and kept in the forefront of our minds. I wonder why that would be? 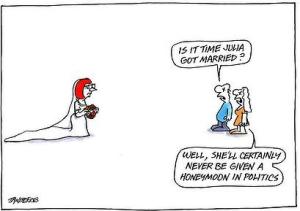 More wedding imagery. You just can’t have enough of it!

I would accept this notion that the criticism and abuse of Gillard is just normal par for the political course if it was framed in the same terms as it would be for Paul Keating or Tony Abbott. But it isn’t.

The problem is with the way in which actions by women and minorities are deemed to have meaning for the entire group. We might say that Whitlam was “Brilliant but flawed” or that Latham is “brilliant but flaky” and so on, but it doesn’t reflect on the fitness of white men, as a category, to govern. Those who would tell us that Gillard’s treatment is no different from the normal inter-male cut and thrust of political stoush are not noticing the media / political obsession with her gender.

Time and again, our news outlets remind us of Gillard’s female (=outsider, from the point of view of the PMship) status. Time and again she is described in a frame of her genitalia, fertility or lack thereof, domesticity or lack thereof, f*ckability or lack thereof. News articles on political alliances used metaphors of marriages, weddings, dates, divorces. We’re never allowed to forget that this person isn’t a member of the default group, but one of the other. She is to be understood in the context of sex and relationships and clothes, not power and governance. That’s how we are used to talking about women. The perpetrators will swear till they are blue in the face that there’s nothing gendered about their remarks and that it’s all exactly the same as aggression between men in politics.

(The outrage from conservative sources at Gillard’s remarks about blue ties is interesting considering the obsession with the PM’s hair, jackets, shoes and everything else about her sartorial life.)

It doesn’t matter that Gillard’s perceived “incompetence” is largely a construct of lazy journalists and hostile political and media opponents. While Gillard is hardly the PM of my dreams, with her support for cruel policies for asylum seekers and single mothers, she’s hardly incompetent compared with the male leaders we’ve had up to now. Even giants like Whitlam and Keating had their weaknesses, as we know. But no matter. The story has been set – Gillard’s incompetent. And the corollary to that, whether you’re on the pro-Rudd Labor or Liberal side, is: Bring back a man and put him in charge.

If Gillard had been Julian Gillard, this would have been seen as a problem pertaining to Julian Gillard. But since it’s Julia Gillard, society’s perceptions of women come into play. She will be judged (again), but we’ll all be judged along with her. There won’t be another woman PM for quite a while, as our deeply sexist society will dismiss her time in office as “the experiment that failed”, “failed political correctness” or some other smugness. The criticisms of Kevin Rudd’s working methods, or the loopiness of John Madigan or Cory Bernardi, on the other hand, won’t prompt people to form any conclusions about the fitness of white men to govern. That’s how stereotyping works.

Crossposted at the Cast Iron Balcony

Like Loading...
‹ I want a Republic and I’m excited about the Royal Baby
Quicklink: Internet Activism Matters ›