These women from the Standing Rock Indian Nation in North Dakota are only holding this Nazi flag up to the camera because they’re about to burn it, having captured it from public display on the property of a white supremacist in the nearby very small town of Leith, ND. 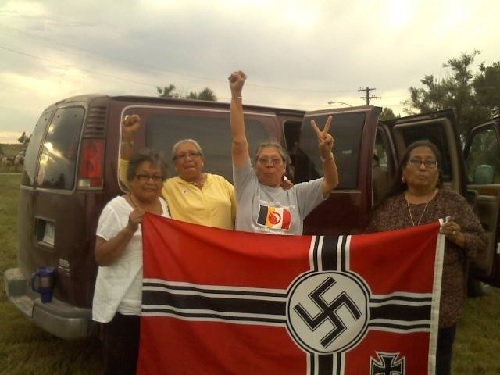 Lakota and Dakota grandmothers captured the Nazi flag hanging in Leith, ND and burned it. Warriors! | via lastrealindians.tumblr.com

Craig Paul Cobb had been quietly buying up land around the town so that he could pass it on to other neo-Nazis, in order that they could outnumber the existing residents at town hall meetings and end up establishing a White Pride enclave on the prairie. Now that the public protests in Leith against the white supremacists received first a moderate amount of publicity, and then this flag-raid by the grandmothers received far more publicity, the bigots won’t be able to continue their plan under the radar. The district’s public authorities are now examining the properties bought by Cobb to ensure that they meet zoning and sanitation laws, and plan to condemn any houses which fail to meet legal standards, which would leave the neo-Nazis out in the cold.

Wonkette has more details. PZ was conflicted about his instinct to applaud the flag capture because it was an act of theft and vandalism and essays a rare-for-him slippery slope argument to express his discomfort. I’m with the majority of the Horde there who are mostly responding that public display of a Nazi flag is a clear threat of violent intent and ending such a display is an ethically justifiable form of civil disobedience. I stand with the grannies.