In praise of Applied Chemistry and Basic Hazard Management

I’ve always been a bit of a cleaning vinegar or bicarbonate of soda fan when it comes to basic everyday cleaning, because it’s cheap and there’s nowt wrong with a bit of elbow grease. However, having grown up in the 70s when the supermarkets started to fill everybody’s houses with their special pre-packaged chemical cocktails for cleaning, I was never taught most of the old-fashioned usages of the more caustic chemicals. Obviously we had bleach which we were taught to be careful around, and I do think I vaguely remember seeing some cloudy ammonia in the tall cupboard in the laundry once, but I don’t think I was ever taught to use it for anything. In the days before anti-tamper bottle-caps, they were always kept way up high in our house, and no doubt it was much easier to use such things when kids were at school, so I get it, but I wish I’d learnt more about household chemicals as a youngster.

Not knowing about them is why now, in my fifties: yesterday was the first time I’ve ever done a simple Ammonia clean of my oven. I’m a convert. My oven was treated somewhat carelessly in its first few weeks in the house and a nasty layer of grease and tarry residue had been annoying me for years, and had not responded to commercial oven cleaning products. Part of me wishes I’d taken a before picture, but mostly no: too much embarrassment. You’ll just have to imagine. 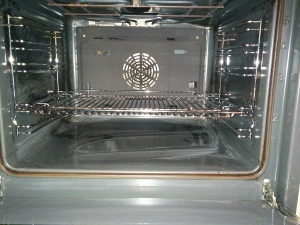 Some bits are even shiny again now!

There’s still some residual crud in a few spots, but it took 3 reiterations of the ammonia cleanse method to get it this far. I plan to wait at least a week before giving it another go to see if I can get rid of the last (might even get myself a new oven light globe again).

Do not breathe the fumes! A whiff or two as you place the ammonia to vapourise in the warm oven won’t hurt you, likewise when you open the oven door in the morning to let the fumes dissipate before you start the wiping/scrubbing (for which you need good kitchen gloves with no holes in the fingers). Just make sure the kitchen is empty of other mammalian/avian life when handling ammonia directly.

Anyone else got some favourite basic chemical hacks to share?

Like Loading...
‹ For those times when actually blocking someone on FB is socially awkward
Today was a singing day ›