Return of the Friday Furry (with bonus ad hoc hoyden!)

I believe some of you have been suffering withdrawals (that’s my excuse to justify how I’ve been missing playing around with my image collection anyway).

Wegman is the Weimaraner photographer, who’s taken umpty-zillion shots of his soulful hounds over the years. They must be amazingly well trained.

The hoyden photos for today are of Katharine Hepburn. Choosing which ones to display for the blog banners was difficult, as Hepburn nearly always displays the exuberant insouciance which is the root of hoydenism. To start, here’s one to keep slightly on the Friday Furry theme:

From Bringing Up Baby 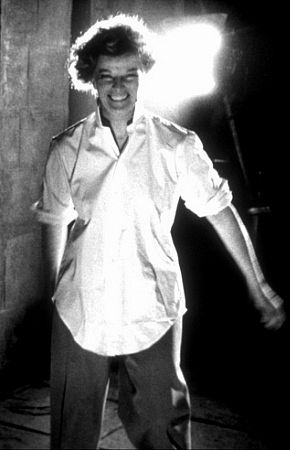 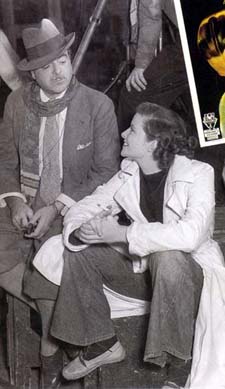 I rather like the way she hit on a look she was comfortable with early on (the white shirt over slacks and practical shoes) and stuck to it. It must have made packing easy!

Of course, some folks really really hated her trousers. Check this out (bolded emphasis mine).

permit me to sketch an imaginary, but perhaps not so improbable Faustian scene. It is the 1930s, and the wily Mephistopheles is chuckling over his new tool to ensnare women from moral and upright lives: Hollywood. Yes, the devil was doing quite well finding new romantic models for young women to move them away from family life and responsibilities. He had now, for example, the smoldering, languid and aloof “grande dame” style of a Gloria Swanson, to buttress the soft, fragile, and helpless Victorian heroine.

“All well and good, so far as it goes,” he gloated. But something was missing. He needed a film star willing to break the very conventions of femininity ““ a tough, rough-talking, bold and masculine kind of woman who would dress and talk like a man, a free and independent spirit to be a role model for new kind of “emancipated woman” of the world he had in mind for the future.

And who did Mephistopheles light his fiery eyes upon? A “mannish” starlet with a “harsh voice” whose success is surely inexplicable other than through a Faustian pact. Boo! Scary! Bwahahahaha!

Marian, is that a promise?