I first remember noticing Ruth Jones as a performer in the darkly grotesque comedy Nighty Night, penned by the brilliantly odd Julia Davis, where Jones played a much put-upon and not terribly bright assistant to Davis’ manipulative monster Jill.

Jones stole every scene she was in, so I was glad to see her pop up a few years later as long-suffering barmaid Myfanwy in Little Britain, forever unable to get Dafydd to accept that he’s not in fact the only gay in the village at all.

She recently popped up on my radar again as one of the principal characters in the British hit comedy Gavin & Stacey (playing Stacey’s best friend Nessa), but it wasn’t until I researched her for this post that I realised she’s actually a co-writer/creator of the show.

Jones and acting friend James Corden (who plays Gavin’s best friend Smithy) came up with the concept for a one-hour special about a wedding, and when they pitched it to the BBC it was suggested that they turn it into a 6 episode series showing how the couple met and ended up walking down the aisle. They haven’t looked back for the last three years, so hugely successful has the show been. Corden in particular has enjoyed the high life in London, while Jones is more grounded in Wales where she and her husband have a production company which aims to promote Welsh culture and talent.

I largely started watching it because it was at least partly about the cultural divide between England and Wales, and my husband is Welsh, plus it had Rob Brydon, Alison Steadman and Julia Davis as part of the ensemble cast – who could resist? As expected, such a cast provides plenty of eccentricities, foibles, peccadilloes and faux pas to strew across the path of true love for English Gavin and Welsh Stacey, who despite being the title characters are in many ways the least interesting relationship in the show – it is the reaction of their friends and family to the situation where one of them is going to have to move away from kith and kin to be with the other, everybody trying to make the best of things and not everyone feeling happy with decisions that are made, that provides the continuing emotional drive of the plot. 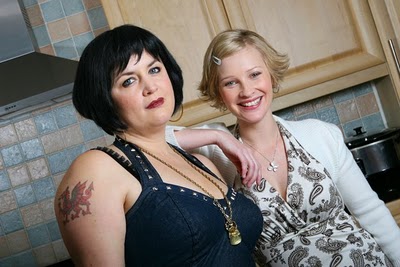 It’s refreshing to see a romantic comedy where the lovers are still concerned about the feelings of friends and relatives, and where it’s simply taken for granted that they expect some mutual understanding that these pre-existing relationships don’t just wither away simply because they have become enthralled. It’s also bracing to see two fat characters for once written for themselves to perform by fat actor/writers, who never ignore their fat but who never make it ridiculous just for the sake of a cheap laugh, either. And just to get the obBechdel out of the way – if this wasn’t a show entirely about the complications of relationships, so that nearly every conversation is about a relationship, this show would pass with flying colours – the women continually have real and meaningful conversations with each other, and so do the men.

Nessa Bowled for Wales? - of course!

But now, let’s get on to the sheer awesome that is Vanessa “Ness” Jenkins, who has a past so chequered that I can’t find an effective simile, and whose intimidating string of achievements is incrementally revealed by casual nuggets of conversation about international travel and top celebrity encounters/liaisons.

Nessa is all woman, with a cleavage to die for, but eschews most other feminine mannerisms – she sees no need to smile ingratiatingly, expresses her opinion forthrightly, refuses to take crap from anybody, drives an articulated lorry and makes the first move in seduction. She is an intimidating yet irresistible femme fatale, who finds life too short to play manipulative games when she can just be bluntly honest in letting people know what she does and does not want from them. Tidy.

The final season of Gavin and Stacey has just aired in the UK (they wanted to end it on a high while it was still fresh, and have not ruled out the occasional special in future years). I can’t wait to see what Ruth Jones does next.