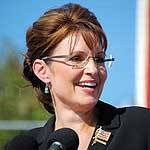 Which means it must be just about time for a US Congressional election. Yup, here come those midterms.  So people are going to start talking to and about Sarah Palin again. Great.

The latest piece that’s got various people agitated is an article on Palin from Vanity Fair that digs out what seems like every bit of nastiness and negativity about her that can be found, a lot of which consists of pointing out that Palin is very ambitious, that this makes her more than a little self-serving and insincere, and that the drive of her ambitions appears to make her prone to both bullying and vengeful streaks.

Wow. What a newsflash about 9 out of 10 politicians on the planet that is. There really aren’t a lot of sweethearts in politics, no matter what “side” one is on. I say this knowing that, what with me being just as tribal as anybody else, that it’s awfully tempting to read a litany of petty and some-not-so-petty flaws about a Big Opponent and go “see, sie’s just as bad as I always thought sie was” and get all triumphally schadenfreudish. But it’s important, sometimes, to avoid giving into that temptation, because sometimes it comes back to bite you.

Because as Liss points out, Palin doing what nearly every other politician does is, according to Michael Goss, apparently super duper extra terrible because (wait for it) She’s A Woman. There’s almost nothing in this article about Palin’s policies other than that she panders to conservatives that the writer appears not to like, and no major revelations of impropriety that we didn’t either already know (Shopping Spree, TrooperGate) or that don’t appear merely mundanely shady, if you can imagine such a thing, in terms of political operatives for someone who still thinks she’s got a maybe shot at the Presidency: i.e. playing some sort of shell games with setting up flit-by-night organisations that pay for her speaking fees in order to get around political donations legislation. Sure, it’s suss: but is it really Great Big News? Meh.

But let’s get back to that bit about maybe still having a shot for the Presidency: the bit that jumped out at me in the VF article was this bit about who is planning to make a big speech this year on September 11 in Anchorage.

When Devon calls to tell [Moore] that Glenn Beck has booked the Dena’ina Center, the largest venue in Anchorage, for a speech on September 11, 2010, she sits bolt upright and yells. Immediately, they start trying to figure out what the news might mean. “Listen, listen, listen: Why in the world do you imagine Glenn Beck would come to Anchorage on 9/11? You think he might have a special guest? With a special announcement? Oh,” she says, her whole face falling as the implications of a Palin campaign kickoff hit her, “Jesus Christ.”

It’s important to know whether Palin is possibly going to announce a run for office again. It’s not important to know that she has a nasty temper and an unforgiving streak. A tendency to employ creative accountants might also be important, but it’s hard to take it seriously when it hardly gets half as many lines in the article as the history of the Shopping Spree.

By all means criticise politicians who advocate policies to which one is opposed. But do it by engaging with the policy debate, FFS.