Transgender Day of Remembrance: Living with the threat 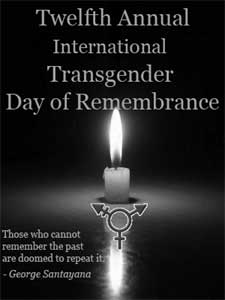 I hate writing about the Transgender Day Of Remembrance, I really do. And yet, every year, I still feel myself compelled to write something, to bear witness to loss, to bear witness to our survival. Even though it’s remembrance of all the deaths worldwide, most writings you’ll find about TDOR online will be from the US, where the day started. But it’s important to acknowledge the specifics of exactly who it is dying, rather than universalise the violence as affecting all trans men, women, genderqueers and other non-binaries equally.

Transgender Europe has just released its list of murdered trans people over the last year. Given our extremely low population numbers, the rates are disproportionately high. The report shows murdered or killed trans people in 19 countries in the last year, with the majority from Brazil (91), Guatemala (15), Mexico (14, and the USA (14). Overwhelmingly, the dead are Latina or black, trans women or trans feminine spectrum, and killed by cis men. Many were sex workers.


But if you look at the report, you’ll note that there isn’t a murder reported in Australia over the last year, so why should Australians be commemorating this day? My answer is this: murder is only the most notable aspect of societal transphobia—and that, Australia has in spades. Violence against trans people is institutionalised, and pervasive.

As a trans woman, I have learned to live with the the threat of violence. In my first year of living out in Perth, I was assaulted, threatened with death, sexually assaulted numerous times, called various slurs by random strangers, spat on, harassed by Transperth guards, and given appallingly substandard medical care.

You learn very quickly that you are not valuable, you are despised, disposable, always in a precarious position (especially with regard to institutions). Every time you have to show your identification and it has the wrong sex, every time you have a cold and your voice has dropped to a gravelly rasp. You never really know when it might come, or how bad it might be.

A couple news stories involving trans women make this clear. In 2007, white Sydney trans woman Bridget Fell was outed by the police to her boyfriend, who then beat her so seriously she was hospitalised for several days. “Mate, you’re rooting a bloke,” they told a man known to be violent. Fell had come to the police for their help.

In 2009, Veronica Baxter, an Aboriginal trans woman, was placed in a male jail against NSW policy for handling trans inmates. Six days later, she was found dead, hanging in her single cell. Protestors have called for an inquiry, though as with so many Aboriginal deaths in custody, none has been forthcoming as far as I’m aware.

Trans women are often placed in the wrong sex prison in many states (the risks of rape and violence in that situation should be clear), with the dividing line being the ability to have accessed SRS—something that can take years to jump through the psycho-medical hoops for. But even for those lucky enough to have had that treatment, those hard-fought policies may not protect, anyway. Similarly, with homeless shelters, indeed any form of sex segregated institution or service. Trans people’s lived sexes are simply not treated as real enough to be respected, by institutions, laws, police, doctors, the media (note the uncritical reproduction of the transphobic police perspective in the Daily Telegraph coverage of Bridget Fell’s case), and on the street.

So it’s hard to know the true shape of the problem of transphobia in Australia because we so often fall through the cracks, reported wrongly as our assigned sexes, or just plain unmourned at all. Or we learn as I did, to not report, to distrust cissexual authorities who may just as easily cause you more harm as help.

And this, as much as anything, is what we should remember on Transgender Day of Remembrance. Yes, remember the dead, remember their names, their lives and their circumstances of their deaths. TDOR allows us to note the most visible and virulent forms of transphobia in this world. But we must also remember that it does not emerge in a vacuum. Transphobia lurks everywhere, unacknowledged, in public life in Australia.