Home › Culture › ethics & philosophy › Burns and Smithers visit the House of Commons – who threw the pie?

Burns and Smithers visit the House of Commons – who threw the pie? 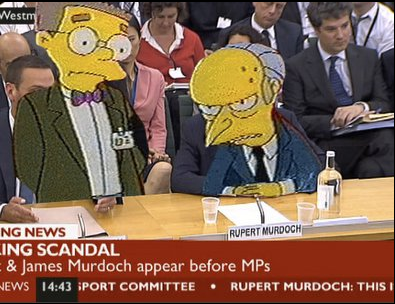 According to the news reports, the pie was thrown by a reckless Bart playing a prank to get attention. But this protestor is more of an earnest Lisa – just read his blog. His twitter account description is “Activist, comedian, father figure and all-round nonsense. Tweeting in an impersonal capacity.” The reportage is focussing on the “comedian”* bit and missing that the first word there is “activist”. You only have to scroll through his tweetstream to see that political commentary outweighs jokes by about 20 tweets to 1.

As an activist, he scored an own goal. Montgomery Burns was being reviled and people were gleefully anticipating his comeuppance. After this harmless and ineptly executed stunt, not only is Burns gathering sympathy, but the issue has switched away from scrutinising #hackgate and spotlighted failures in the security of the House of Commons.

*I looked at his comedy video from a few years ago on YouTube. The sound quality was poor, so I couldn’t understand all of what he was saying to form a firm opinion of him as a jokester. He was, however, making that audience laugh, which is the goal. Better played than the pie stunt.