Home › Politics › parties and factions › Don’t stuff it up

Don’t stuff it up 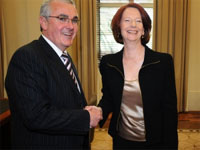 August 2010: Wilkie and Gillard pose after negotiations for him to support her minority government

Just echoing John Quiggin – gaining Jenkins’ vote back on the floor doesn’t mean the ALP can now ignore Wilkie’s poker machine reform bill, no matter what the party machine goons might be urging. You should have stopped listening to them ages ago, don’t make the mistake of following their advice now.

Of course, if you’re just playing it close to your chest and letting the media get all excited over something you have no intention of allowing to happen, sure.  Let them gibber and holler and strut and fret their fury on the stage.