Home › Culture › history › ObFreeFallSpaceJump post: a little detail I was glad to discover

ObFreeFallSpaceJump post: a little detail I was glad to discover

Because I obviously haven’t been paying enough attention, I hadn’t realised that Joseph Kittinger, the USAF officer who previously held the record for highest/fastest freefall parachute jump after the 1959-60 Project Excelsior research into high-altitude bailouts (and thus was also the first human in space (Yuri Gagarin’s orbit in 1961 made him the first human to reach outer space)), was part of the team for Felix Baumgartner’s successful attempt on those records (for Science!).

Kittinger was a member of the mission control and helped design the capsule and suit that Baumgartner ascended and jumped in. Kittinger´s record for longest free fall was not broken.
Source: Wikipedia

That thrills me because it was one of my favourite aspects of a poster I used to have celebrating landmarks in space exploration (I never threw it out, it must still be around her somewhere!) – this tiny helium balloon at the edge of the atmosphere with Kittinger jumping from it – most people I pointed it out to had never even heard of it happening. 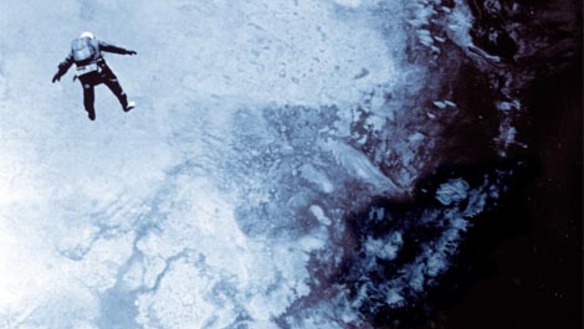 An independent documentary about Kittinger’s famous jump came out in 2011 – The Lonely Leap (which was the name of Kittinger’s book about it all).

Before the Space Race.
Before the Apollo program.
Before there were astronauts.
One man went into space, without a rocket.

This is the forgotten story of the first man to walk in space, and his extraordinary journey back to earth.

Obviously Bamgartner’s jump is damn impressive, although with all the technological edge of 5 decades of advances in materials and aeronautical knowledge it’s intriguing that the record-breaking differences appear so incremental. But when Kittinger went up for Excelsior I, they didn’t even know whether his pressurised suit would keep him alive in space: that was truly research that broke new ground.