Ruby Hamad has written an fascinating article in response to blogger Lauren Shield’s book about dressing modestly for 9 months in an attempt to subvert the American beauty culture. While Hamad has no problems whatsoever with the subverting of beauty culture what does frustrate her is that Shields chose to do this as a way of experiencing what a Muslim woman, who chooses to cover up, may feel.

“In America”, Shield’s blog banner gravely announces, “we see Islamic women all covered up and think, ‘That poor woman, made to be ashamed of her body!’ But is it any less oppressive to convince a woman that her uncovered body is never beautiful enough? Is covering enslavement… or freedom? I want to find out.”

Shields spent nine months conducting her “experiment”, during which she “covered all of my hair, wore nothing that was so fitted that I felt like I had to sit or stand funny to look good, and never exposed my knees or my shoulders, except at home. With rare exceptions, I wore no makeup or nail polish.”
…

Shields is railing against the Western beauty ideal that expects women to spend excessive amounts of time and money to dress in what amounts to “a Grown-Up suit.” In that I couldn’t agree with her more. However, Shields, who can only witness Muslim culture through her own Western lens, falls into the trap of romanticising the “modesty” of Muslim women for whom covering themselves is itself a religious requirement.

Read the whole thing. Hamad shows why this sort of cultural appropriation is both unhelpful and ultimately unenlightening for the person doing it as well.

What struck me at first about the description of Shield’s experiment was that she could have just dressed with no makeup, nail polish, high heels and wearing ‘modest’ clothing without needing to try link it to anyone’s particular religion. Plenty of women dress this way all the time because it is comfortable, cheap, they can’t wear makeup or heels, they are wearing a uniform for much of their lives, or for a myriad of other reasons or simply because that’s how they like it.

If she specifically wanted to experience what it is like for religious women covering up for ‘modesty’ then she could have chosen from a whole raft of other religions. 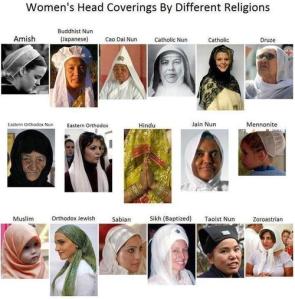 I think it is an interesting thing to try in and of itself, especially as a young woman who may have been accustomed to wearing make up and heels and fashionable clothes, to step outside of that to experience how you are treated by society when you go against societies expectations and I will probably read her book. But I am not comfortable with the idea that doing this would give you any insight into someone else’s reality.