My favourite tweet from when The Great Gatsby was released earlier this year came from a Richard Lawson (@rilaws): “Got my Gatsby screening invite! Am willing to sell it for $45 million to give to Sally Potter to make the real Gatsby movie.”

Sally Potter has directed only seven feature films in her thirty-plus years working in the arts, but every time she makes one it does something no one else has yet tried. A musician and composer, dancer and choreographer, writer and director, she is one of those rare and overwhelming complete talents. Her courage with form is breathtaking, she simply ignores what people assume about what a story needs to look like.

Somehow Orlando seems to have been forgotten when people do movie retrospectives, but I cannot overstate the impact that movie had at the time. It was the first arthouse ‘crossover’ movie. That is, it was released in small, art cinemas, but became so popular that it made the jump to major, conventional theatres. This opened the gates for all kinds of others, suddenly the big distributors saw they could back lavish, perplexing movies and expect a return. I don’t think there would have been a Crouching Tiger, Hidden Dragon without Orlando. It says far too much about the film business that Potter was not nominated for a directing Oscar. It was also Tilda Swinton’s breakout role. By good chance someone on Youtube has put up what is potentially my favourite segment of filmmaking of all time; there is so much going on crammed into two minutes it’s boggling:

So Orlando goes into the maze in the 18th century and comes out in the 19th. Notice the switch in the music from Baroque harpsichord to big, lush, Romantic piano chords. Notice how she invokes Rousseau as she presses herself to the misty ground. Billy Zane is pure Byronic hero, but in some delicious gender-bending, he is the one who twists his ankle, and rides off behind her. Tell me your heart doesn’t go pitter-pat like mine watching them.

The Tango Lesson is shot almost entirely in black and white (except for flashes of jewel colour in brief scenes where you see the vision Potter has of the movie she is supposed to be writing) and picks apart the creative process. Exquisitely filmed, it was much criticised for self-indulgence, while five years later Charlie Kaufman was hailed as an innovative genius for putting his own struggles to write into Adaptation. Go figure.

The Man Who Cried is Potter’s most ‘Hollywood’ film, with American stars and a more-or-less linear narrative. It isn’t completely successful as a movie, but it still has several moments that stick. Cate Blanchett plays a Russian showgirl trying to find a meal ticket man. Every now and then she forgets herself and her face lapses into utter bleakness, and then you see her suddenly remember she is supposed to be happy and fun, and she smiles, and your heart breaks for her.

The screenplay for Yes is written entirely in verse. It was created in direct response to the attacks of September 11 2001, and the subsequent invasions of Afghanistan and Iraq, and tells the story of an affair between an Irish/American woman and a Lebanese man living in London. If you get the chance to see it on DVD don’t miss the Extras, which include footage of Potter working on several scenes. You get to see an intense conversation with her cinematographer about how they don’t have enough money, so they are going to have to manage without the time, and even the lights they want, and somehow make it work. There is an extraordinary segment that takes place when the news has just arrived that the US has begun bombing Iraq. Sally is rehearsing a crucial scene with her two lead actors at her home, and talks to them about why it is important that they make this film. They are all in tears.

Rage was filmed specifically for release on mobile phones. This means the whole thing is brilliant actors talking to camera in front of a blue screen. Steve Buscemi, Diane Weis, Eddie Izzard, all acting their socks off. Jude Law as a supposedly Russian supermodel called Minx, whose accent slips at key moments. David Oyelowo (a prominent RSC actor) as a New York detective who quotes Hamlet. If the chance to watch Judi Dench light up a joint fills you with glee, this is where you can go for that hit. Watching on a TV you can see how they have been directed to deliver performances that will work on a 5x7cm screen. 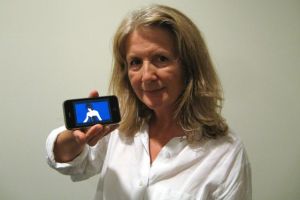 The premise is that a high school student has talked his way backstage at a fashion show and is interviewing key participants, ostensibly for a school project. All talk more than they should because they assume he’s harmless.

Ginger and Rosa is her most recent film, drawing on her memories of growing up in England in the 60s with the fear of atomic war. I haven’t seen it yet, but something I believe you can identify about all her work is that she always treats both her actors and the characters they play with respect. My dream combination would be if Potter were to direct a screen adaptation of Jeanette Winterson’s novel The Passion. If I had any credits with the movie gods I would use them all up to get that.

And how sensational is this picture of Sally Potter with Tilda Swinton? This is at a 2010 Retrospective of her work shown at the New York Museum of Modern Art. 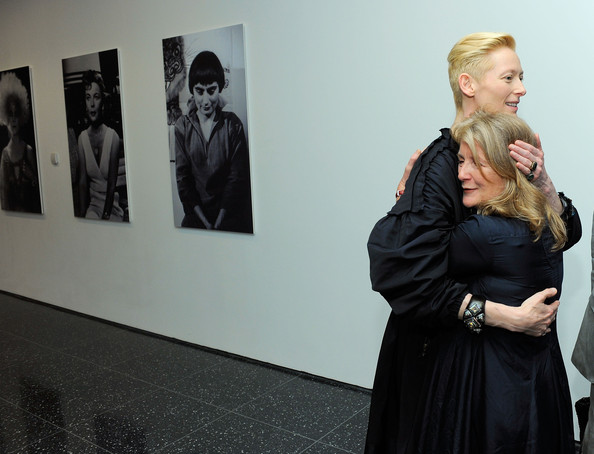 At the Museum of Modern Art, via Zimbio