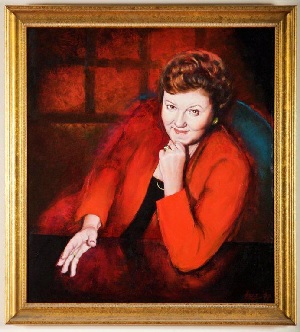 A portrait of Joan Kirner as Premier of Victoria (source: National Gallery of Victoria)

She will be remembered for her tireless work promoting women’s rights, conservation, and education and her love of Essendon Football Club.

In 2012, Ms Kirner was appointed a Companion of the Order of Australia (AC) for her work in advancing equality for women, and for her political achievements in the 1980s and 1990s.

Accepting the award she said she was very proud to have been the first female premier of Victoria.

“My mother used to say to me you can do anything as a girl that you want to do, and I believe that,” she said.

She said as a female leader, the media judged her harshly.

“They couldn’t cope with the argument and the discussion, the public and the political dialogue so they had to cope with all they could cope with and that was, what I was wearing, what I was thinking,” she said.

She listed her greatest achievements as creating the land restoration network, Landcare, helping people with special needs and paving the way for women to enter Parliament.

It’s heartening to see so many women in politics today praising her legacy as a mentor above all.