This makes it seem like a good time to re-post from the week when Emma was our Friday Hoyden. The following was previously published on 15 August 2014.

At a time when the Australian government is doing its best to behave like a blend of Dickensian villains and French aristocrats, without the compensatory good taste in cravats of either [ed to note: this observation does not require updating], we are more than due for a genuine revolutionary for a Friday Hoyden. Emma Goldman was a Russian (or technically Russian Empire, from an area now in Lithuania) Jewish immigrant to the USA, who spent her life being persecuted for her work campaigning for the rights of workers and marginalised groups of all kinds.

Goldman classified herself as an anarchist. Throughout her life her campaigns were always against state control of people’s lives and people’s voices, and against the exploitation of the vulnerabilities people incur through being poor, ethnically marginalised or female. She was one of the earliest campaigners for women’s reproductive rights. An idealist who never let that cloud her judgement, she immediately reversed her hopeful stance on the Bolshevik state in Russia when she saw that it involved curtailing people’s right to freedom of speech, ostensibly for the good of greater, long-term goals. She was absolutely strict in her belief that you could not win ultimate freedom by denying any person along the way their individual humanity. She never denounced violence as a tactic, which was used by critics as a reason to dismiss her philosophies and deny the value of her influence. She was jailed numerous times, including for giving public lessons on the use on contraceptives, and would come out and get right back on with the work. 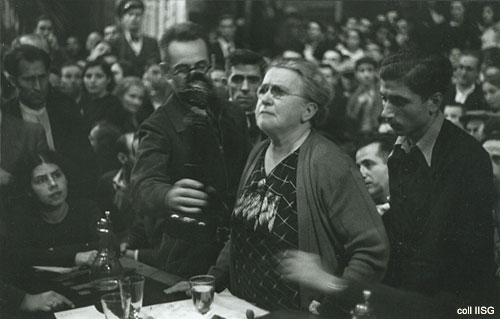 Speaking in Barcelona, 1936. I love how active and determined she looks.

Reading her autobiography, I was reminded (this is going to sound absurd, but bear with me) of the impression given of Jesus, if you read the bible with the mysticism stripped away. That is, she doesn’t just preach goodwill to all, she sees herself as in no way above being the person to wash someone’s feet, if that is what the situation requires. Nurse the sick, shelter the outcast, no judgement offered except of the powerful and the decadent. She was just as likely to give a prostitute a bed in her home while she treated her for venereal disease, as to go out and address a rally of thousands from a podium. Unlike many other leaders of movements for social change who have avoided getting their hands dirty (Brecht’s infamous silk-lined workers’ cap springs to mind), Goldman could be the patron saint of those who walk the walk.

I recommend her autobiography Living My Life, which is an an engaging and insightful read.

Like Loading...
‹ QOTD: @DigbyParton on who Americans trust less than politicians
Grabbing somebody is Assault, and sexual touch makes it Sexual Assault. Stop minimising this. #rapeculture101 ›