This is the container of leftover sausages I put away in the frig last night. 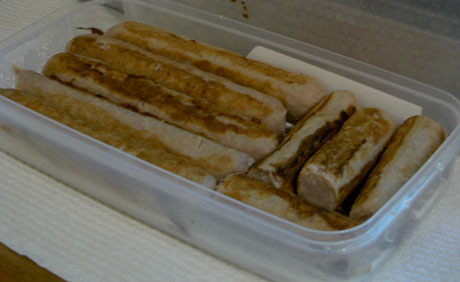 This morning when I woke up and went to the frig for milk, not a single one of those sausages had been eaten.

What can have happened to the Phantom Sausage Snaffler?

Police hold grave fears for the safety of the Phantom Sausage Eater after a plate of sausages remained intact overnight in the Sydney Suburb of Togsville. A source who claimed to be close to the Phantom told us that the Phantom may have been distracted by an especially satisfying evening meal and the unexpected appearance of raisin toast at breakfast. A Police spokesman revealed that the sausages are to be left unattended again tonight in the hope that the Phantom will strike again and allay public concern for his safety.

The Phantom has been a friendly ectoplasmic cohabitant in the tigtog household since mr tog and I first met. I find his disapparation inexplicable and most alarming. And who else is going to eat all those sausages?