Guest post by Helen on the Cast Iron Balcony. 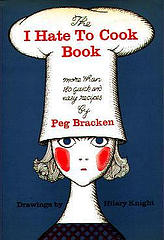 Most people know Hillary Knight’s wonderful illustrations from Eloise, the little hotel-dwelling spoiled-rotten urban girl. For me, his line drawings take me back to my childhood in Adelaide, where my mother, a university-educated housewife, was navigating the late 1950s and early 60s. I’ve mentioned before that The Feminine Mystique was one of the books in our bookshelf. The I Hate to Cook Book is another. It had a companion volume: the I Hate to Housekeep book.

The books are a manifesto for the women for whom cooking and housework weren’t their vocation, and who didn’t have the ‘natural’ womanly skillset that was supposed to attach to their biology. They were defiant, irreverent, and very funny. And they were like a coded message from my mum.

It’s reported that Bracken’s first husband’s reaction to her book was “it stinks”.

“I went to work on the book, but then I hit a speed bump,” she says. “My husband who was also a writer was jealous. He said, ‘You’re wasting your time; who’d want a book like that?’ He didn’t want competition. He wanted to be the only writer in the family.”

After that particularly telling period in their marriage, Bracken says, “I showed enormous patience and waited four more years until I left him.”

(An interesting bit of trivia from the linked article: Bracken co-wrote a syndicated cartoon, “Phoebe, get your man”, with Matt Groening’s father. His name was Homer.)

The IHTCB was an icon of an era where women were just beginning to come out from under the cloud of the stultifying postwar period. That was when women, who’d gained work and life experience with the men away at the front, were told in no uncertain terms by society that their place was in the kitchen now that they were back. Yes, the recipes were bloodyawful, relying as they did on canned and packet ingredients. But this was a time where women couldn’t expect their male partners to share the domestic work. The growing popularity of instant food was a culinary disaster, but one of the few ways that women could cut down on the hours spent on work in the home.

Bracken appreciated good food, but not if it was at the expense of time for reading, smoking or drinking Martinis. She gave her recipes such names as “Sole Survivor” and “Stayabed Stew” and focused on easily available ingredients, including spam, baked beans, corned beef hash, cheese, frozen vegetables, fish fingers and canned mushroom soup, which she often used as a sauce…
…Much of the appeal was in the tone of her writing: “Add the flour, salt, paprika and mushrooms, stir,” she instructed in her recipe for “Skid Road Stroganoff”, “and let it cook five minutes while you light a cigarette and stare sullenly at the sink.”

A hoyden after my own heart. I wasn’t really up to reading The Feminine Mystique (published three years after this book) at the age of seven or eight, but I bet I soaked up as much subversion reading Bad Girl Peg. If you see the IHTCB or the IHTHB in a second hand shop, snap them up while you can.