Whoydensday: Dalek in a Pond!

If you haven’t heard the news yet — last week, a dalek head was found in a pond in Hampshire. According to telegraph.co.uk: 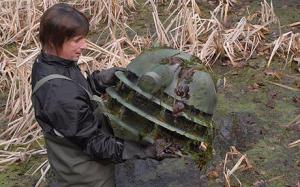 Sales executive Marc Oakland was pushing a rake around the bed of the shallow pool when he found the object with its distinctive eye stalk.

The 42-year-old said: “I’d just shifted a tree branch with my foot when I noticed something dark and round slowly coming up to the surface.

“I got the shock of my life when a Dalek head bobbed up right in front of me.

[Pond warden, Tony Brown] said: “We made a very thorough search of the rest of the bottom of the pond and there were definitely no alien remnants lurking.

I would just love to know what archaeologists thousands of years from now will make of any dalek remanants they find.

Beneath the fold — The Dalek Song!

(A variation on The Llama Song)

And lastly, here is the classic image of Ace about to smash a dalek with her baseball bat: