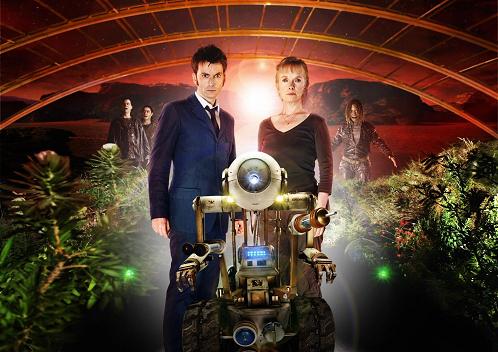 Image: David Tennant as the Tenth Doctor and Lindsay Duncan as Adelaide stand in a greenhouse on Mars, with a small wheeled robot in front of them. Behind them are several humanoid figures dripping in water, with gaping cracked mouths.

The Waters of Mars, the second Doctor Who stand-alone special for 2009, written by Russell T Davies and Phil Ford, aired in the UK on Sunday night, and is due to air in Australia, on ABC1, on Sunday December 6th. As I’m sure a number of people here have already seen it, consider this an open spoiler and discussion post. Please consider anything that has aired in the UK fair game — but please DO NOT spoil for the Christmas and New Year specials, beyond what we saw in the trailer at the end of the episode.

Personally, I loved The Waters of Mars. Although it was quite bleak in some ways, I did not find it nearly as depressing as Children of Earth: in this instance, I think that RTD managed to strike the right balance between darkness and hope. I thought it had a few problems, particularly relating to Adelaide’s encounter with the Dalek in 2009 (after all, the Daleks were planning to destroy the universe within days — if they were aware that Adelaide’s death in 2059 was a fixed point, then they would be aware that their plan would fail), but overall I thought it was a fine episode.

I found the emergence of the dark!Doctor at the end particularly thrilling, and I love that his darkness stems not from malice, but from his desire to save people. It showed exactly how much the Doctor needs his companions and is lost without them, and it tied in nicely with all the hints of darkness we’ve seen previously, in episodes like The Runaway Bride.

I’m really looking foward to seeing how this develops in the following episodes — was Adelaide’s suicide enough of a wake-up call for him, or will the “Time Lord Victorious” wreak havoc throughout the universe?