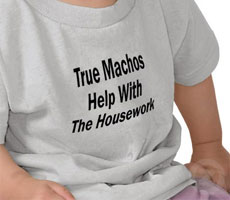 Divorce rates are lower in families where husbands help out with the housework, shopping and childcare, according to a study of 3,500 British couples published on Tuesday.

The research by the London School of Economics (LSE), entitled Men’s Unpaid Work and Divorce, found that the more husbands helped out, the lower the incidence of divorce.

This was hugely popular – I googled the thing and it had been reported in practically every media outlet in Australia, as well as India, Pakistan, Libya and Ghana. Most of them simply reported the press release, without questioning the language in it. Most commenters, even if they supported the idea of men taking on more domestic work, didn’t question the H word.

Here’s the thing. Evidently even people who study these things for a living don’t get the fact that if you’re “helping” someone with something, that means that the task in question belongs to that someone. You may be delegated part of the job to do, or you may be doing it for them in their absence, but if you’re helping, you’re not the owner of the work.

Bluemilk posted recently about the exhausting routine of owning the domestic work (Death by a Thousand Negotiations): you might get “help”, but it’s up to you to remember, prioritise, triage, provision, and delegate. In other words it’s adding another job to the jobs. You might think that as an older feminist blogger with teenage children I must have the household work balance sorted by now. You would be wrong (it’s in my I-am-really-a-rubbish-feminist shame file). And occasionally, I rack up the psychic energy to engage in another round of discussion. In the past, I used to get the H-word constantly. While my attempts to get our household load closer to 50/50 have so far failed, I think I’ve managed to make him get why “helping” is inadequate and wrong. He does still think, though, that if I want him to do things he should be told what to do. (And readers, you all know how well that goes. You’ve all seen Seth Rogen movies and the wife as joy-killer.)

This area of our lives is going to give me endless brain pain and irritation as long as the domestic work is my responsibility and yours, female reader, and male input is read as “helping”. Let’s change the press release: “…In monogamous hetero households, the closer male partners came to taking equal responsibility for domestic work of their own volition, the lower the incidence of divorce.” There, fixed it for you.