Perhaps revelations over the last week regarding disrespectful shenanigans on top of Uluru will finally push the Federal govt to honour the promises it made in 1983 to stop people climbing the rock? 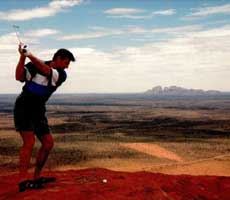 “I didn’t hit a golf ball — I posed pretending I was hitting a golf ball,” Newman told Nine News.

“I was having a bit of fun 20 years ago. It was not meant to be disrespectful. [I] wouldn’t have done it if it was.”

Get that? Posing as if you were about to do something disrespectful but then not doing it makes it Totally OK. It’s not as if he got naked like the French woman, so lay off poor li’l Sammy.

Of course, newman was actually lying with what he said above about just pretending, going by the exchange he had on Melbourne Talk Radio that sparked this round of outrage. Does he think nobody checks these things?

Newman: “I … actually hit a golf ball off the top of it (Uluru) toward the Olgas.”

Price: “It’s a traditional Aboriginal site, you’ve taken your one iron up there and hit a golf ball?”

Price: “You shouldn’t be hitting golf balls off there. Did you get on to it?”

Newman: “It was a magnificent one iron. It carried about two-and-a-half miles.”

Price: “Oh gee, you’re going to get us in trouble. The traditional owners don’t want you on it.”

Newman: “People have been climbing up that rock until the traditional owners got on to the fact that there’s some mileage in … not letting people climb up it, Steven.”

Various indigenous football players have spoken up to tell Newman that Actually, It Is Not OK At All, but he has not responded to them. I wonder what all those folks who think Tamina Tahu should just have had a quiet word with Andrew Johns about his behaviour think of that?

As I’m sure some of you remember, lauredhel posted on this Uluru nonsense back in January, pointing out that there are no sanitation facilities on Uluru, nor rubbish bins, so the rock is strewn with rubbish, urine and faeces from the climbers.

It’s well past time for the wishes of the traditional owners to be respected. There’s plenty to do locally around Uluru to appreciate its majestic beauty without climbing it. Stop the climb.