On A Woman Choosing Not To Date A Geek

[TW for violently abusive language towards a woman] 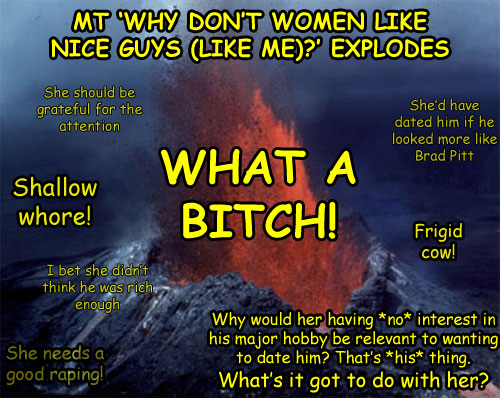 Free Clue: abusing women for daring to have their own opinions about whether a man is or isn't their type is Not Nice. Using blatantly misogynist slurs at any time is Not Nice. Rape threats are seriously Not Nice. Acting as if women are too stupid to grok this obvious discrepancy between your self-description and your actions is Not Smart.

For those who haven’t come across this story, it starts when a man and a woman in New York came across each other on the OKCupid dating website and went out twice, were each less than enthralled with the other, and moved on. So far, so ordinary.

What happened next though was that the woman (AB) wrote a trollumn for Gizmodo about how the man should have disclosed in his online dating profile that he had a seriously geeky hobby, so that she could have not even wasted her time (which she casts as good for him too – he wouldn’t have has his time wasted with her either). She decided to name the man (JF), presumably because he has played the game Magic: The Gathering professionally, and is in fact rather famous for it (more trollumn points). Criticism immediately ensues, the story is linked all over (trollumning successful from the point of page views), and then the comments section erupts with misogynist abuse against AB, much of if from self-identified “nice” men castigating her for not giving one of their own a fair go. The violence of that abuse is what inspired the image above. (I’m deliberately not linking or naming full names, but I’m sure that searching on gizmodo+magic+the+gathering will get you all the links you might want)

For all those criticising AB for naming JF when he’d done nothing worse than not appeal to her as a dating candidate, and in such a way that casts him as failing some obvious social obligation, I totally agree that this was a shitty act that deserves calling out. (I also want to note here that JF has refused to get any more negative than ‘it’s kind of uncool’ about her violation of his privacy: it’s not his reaction that is the problem here.)

For all those criticising AB for engaging in geek-bashing with her implications that any ‘reasonable’ human being would feel exactly like she does about any hardcore M:TG player, yep, I’m totally on your side so far. Her deal-breaker is not going to be everybody else’s deal-breaker, she should definitely know better than to write as if it could/should be, and there are indeed plenty of people for whom geeky gaming hobbies are not just not deal-breakers but would in fact be a strong positive. Check.

But: for the extremely vocal core criticising AB for daring to decide that JF’s strong interest in the game and her total lack of interest in the game indicated a fundamental incompatibility, that the very idea of her having any deal-breakers at all is “elitist”, that she should be ashamed of not being willing to date any “nice” guy at all ever no matter what his habits and interests might be: what the fuck is wrong with you? It’s the one thing she gets right in the whole crappy article.

If I was out on the dating scene now, and I discovered that my date’s favourite show was Two And A Half Men? He would be eating my dust, and I make no apologies whatsoever for prejudging that this indicates fundamental incompatibility between us. It’s not the only deal-breaker on my list, and I won’t apologise for any of the others either. It continually amazes me that men write over and over again about not wanting to date fatty boombahs or women who earn more than they do etc and that, although their standards might be criticised on various grounds, nobody ever bats an eye at the fundamental concept of them having certain standards for whom they date, yet women are continually asked to justify why they think they have any right to refuse to date any man who asks them out.

The biggest disconnect I see is the repeated “what’s it got to do with her if he likes [something she doesn’t like]?” trope, and this one really bugs me, because it displays an abiding contempt towards women self-determining the ordering of their own lives. Sure, most people can cope with a partner having some interests they do not share so long as those interests don’t interfere with other interests one finds more important. Sometimes partners with significantly schedule-competing interests can even agree to disagree on what they each find most important and make workable compromises about which interest takes priority when so that everybody’s reasonably content about the balance.

However, nobody should feel obliged to make such compromises unless they really want to, and one can’t force others to want to just because that is what would best suit you. But there’s a whole lot of prescriptivism going on in various comment threads about this that opines how AB and/or any other woman should just ignore what a man’s personal interests/hobbies might be no matter how much they might clash with her own personal interests/hobbies, because the unsaid assumption is that her interests simply don’t matter as much as his do.

Related post at Geek Feminism: Geeks as bullied and bullies

Image Description: a violent pyroclastic explosion from an erupting volcano, with superimposed text.
title: MT ‘WHY DONT WOMEN LIKE NICE GUYS (LIKE ME)?’ EXPLODES
one phrase is embiggened and centred in the heart of the eruption.
WHAT A BITCH!
various other sentiments surround the exploding mountain
Shallow whore!
Frigid cow!
She’d have dated him if he looked more like Brad Pitt
She needs a good raping!
I bet she didnt think he was rich enough
She should be grateful for the attention
and finally
Why would her having *no* interest in his major hobby be relevant to wanting to date him? Thats *his* thing.
Whats it got to do with her?