There’s something about women cricketers… they just can’t confine themselves to one sport, dammit! 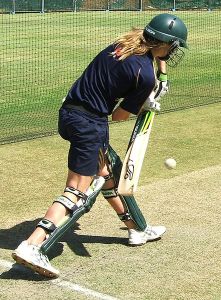 Ellyse Perry is one of the Southern Star’s best known players, playing for the national team since age 16. She’s an all-rounder, and now aged 21 has appeared in 2 Tests and 39 One Day Internationals. (Women cricketers have far fewer opportunities to play Test matches than men do, a lifetime total of under 10 Tests is normal.) She also debuted for the Matildas, our national soccer team, in the same year as she began playing for the Southern Stars. In 2011, when she came on as a substitute in a Norway v Australia game in the FIFA World Cup she became the first woman to have represented Australia in senior World Cups in two different sports. 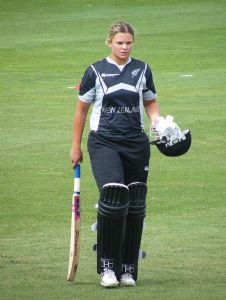 Suzie Bates was made captain of the White Ferns in December 2011. Like Perry, she is an all-rounder (or apparently so, I haven’t found her described as such, coverage of her online is poorer, and if you ever felt like contributing to Wikipedia today is your lucky day): she currently holds the highest batting average in her Twenty20 team, and she took four wickets in New Zealand’s path to the World Cup final in 2009. In addition to her years of cricketing, she also played for New Zealand’s basketball team in the 2008 Olympics, although she told Cricinfo that her responsibilities as cricket captain will probably mean that she cannot play again in the 2012 Olympics.

Perry and Bates will be part of the Southern Stars and the White Ferns respectively during their upcoming eight-match series in Sydney/Melbourne in late January and early February.