Shakespeare and the Bechdel Test

Plays are sometimes even worse than movies in the representation of women, due to things like small casts, limiting the chances for a range of representations, and numerous cultural traditions that banned women from performing. The English language’s most famous playwright remains in constant production, and staging his plays is a huge international industry, so it is worth looking at whether he can do better than a modern Hollywood producer. The famous Bechdel test does not tell us whether the representations of women in a piece of fiction are compelling or satisfying, but it does give us a sense of whether the writer regards women as an integrated part of the world being created. How does Shakespeare, so often spoken of as having something to say to all people, measure up in offering the voices of women? 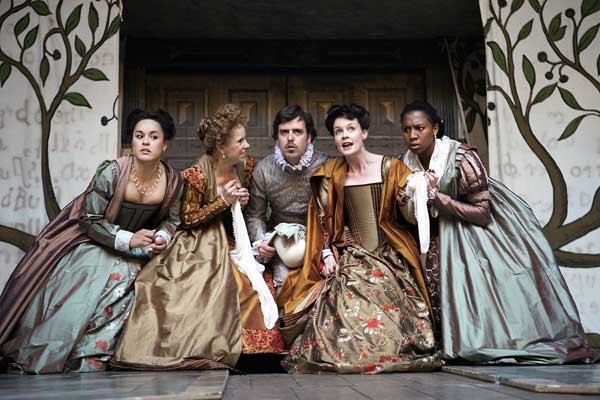 1. It [the movie or, here, play] must have at least two, named female characters

The Tempest is the only one of Shakespeare’s plays that cannot scrape together at least two, named female characters. Ariel could possibly be granted female status, and is often played by a woman these days, but is more accurately thought of as genderless.

Timon of Athens gets through on a technicality, but does not really deserve to. Two women appear in a solitary scene to speak a handful of lines between them, and provide a foil for some misogynist slurs. We must apply the rule generously to allow this one, as the two are utterly undifferentiated, with no discernible personality, they merely happen to have been bestowed with names. There is also a “masque of ladies” in an early scene. A masque was an entertainment designed for court, a bit like a ballet, but with some spoken words as well as dance and music. (Now I think about it, Tempest has a masque with goddesses, too.) The performers in a masque are not integrated into the story arc as characters, so it’s hard to know whether they count or not. This play is markedly out of character for Shakespeare (it was a collaboration with Middleton), and I tend to think of it as not really having female characters at all.

There are three plays that, while they have several female characters, keep them separated. Julius Caesar is one of these, in which the wives of Caesar and Brutus make separate appeals to their respective husbands in the hope of averting the disaster they feel is immanent. Parts 1 and 3 of the Henry VI trilogy are the other culprits. Each of these two plays has one sensational part for a woman (plus a few one-scene wonders) but as she is a military leader she spends her stage time surrounded by men, and has no opportunity to converse with other women. Joan of Arc in part one and Queen Margaret in part three are both marked as exceptional, possibly dangerously perverted, examples of womanhood. The other women in these plays feature in the more usual female role of bargaining chips to be moved around in the formation of potential dynasties.

Troilus and Cressida comes close to failing at this second stage, but in a more interesting way. Here Shakespeare appears to be making a point of how isolated Cressida is, even giving her a manservant in the scene where we might expect a female confidante (of the kind seen in Two Gentlemen of Verona and the like). The only time two women appear is when Cassandra and Andromache unite to beg Hector not to go to battle. Which leads us to…

3. About something other than a man.

After sailing through the first two criteria (we have only eliminated five plays of 38), it is at this final hurdle that a few of Shakespeare’s plays fall. Measure for Measure has five named female characters, one of whom converses with two others, but unfortunately they are forced to keep discussing men, by the men’s insistence on messing with their lives. Generally, the more women, the more likely we are watching a romantic comedy, and therefore the more likely that most of the characters are talking about relationships between men and women most of the time.

Much Ado About Nothing, Love’s Labours Lost and All’s Well that Ends Well show whole groups of women together, admittedly they are usually talking about men, but not always. Much Ado is a great play for interactions among its four women, but only scrapes by with a couple of brief conversations that are not about men (one is about a wedding dress, I don’t know if that’s any better). Four is the most usual number of women in Shakespeare’s plays, and this one displays a common pattern for this often rather formulaic playwright: heroine 1 (upper class, feisty), heroine 2 (upper class, doormat), confidante of indeterminate class, lower-class comic. There are variations, of course. Twelfth Night and Othello only have three women, Love’s Labours Lost has five. Pericles has seven female characters, as well as a couple who, in modern stage practice, convert very easily to women, if the director is so inclined. The Winter’s Tale, by the standards of plays of this period, is a oestragen-fest, with representatives of the virgin, mother and crone, not one but two comic wenches, and a whole slew of female servants and ladies-in-waiting.

The great strength of what Shakespeare does for women lies less in their number than in their complexity. At first glance they seem easily classifiable as ingénue, matron, villainess and so on, but always reveal themselves as much more when examined closely. In addition, one of the scenarios he returns to most often is of women supporting each other, even in the ranks of death, which belongs to that quirky category of things that happen all the time in life, but hardly ever in the movies.

All in all, Shakespeare does better than most, but not as well as we would like. We might choose to think of him as Joss Whedon in doublet and hose.

Warning: Do not attempt this exercise with David Mamet.

Like Loading...
‹ Signal Boost: Kickstarter for documentary on violation of workers’ rights in strip clubs
Rape Culture Observation: grooming victims *looks* like being “a good person” ›