New Who: S7 Ep1 Asylum of the Daleks

We watched the show on iView last night, via a recent update to our venerable PS3 which allowed us to hook our TV directly into ABC’s iView interface.  Noice.  It will be broadcast on Australian free-to-air next Saturday September 8th.  Who else has geeked out already? 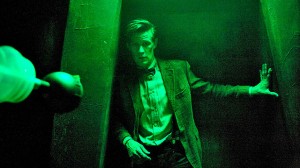 My own view is that it was a romp at rattleneck pace and whoa so many plot corkscrews.  Where will this season go?  Who knows? (well, some of us who read the fan-sites have a few ideas of where it goes, obviously – and how the hell are they going to manage those rumoured things after that ending to this first episode?)

Spoiler-rich reviews/speculations (including casting spoilers for later in this season and even next season), including a surprising number of reviewers who really should catch up on the facts about Daleks and stairs:

If you want to add your own spoilers in comments, please wrap them in our special Hoyden spoiler tags so that they get that nice bright orange stripe down the side? Then readers can flip past them if they want to.