“Taxation without representation is a tyranny… I am unable to pay money to the state, as I am not allowed to exercise any control over its expenditure.” – Princess Sophia’s response in court, on charges of refusing to pay licence fees and rates.

With the movie Suffragette about to come out (can’t wait, but not until Christmas for us Downunder), now is a great time to look at a member of the movement who was not included in the movie but should have been, and then should definitely get one all of her own.

Sophia Duleep Singh was one of the most stalwart and prominent figures in the British Votes for Women movement.

Her background was Punjabi on her father’s side, German and Abyssinian on her mother’s. However, she was born in Britain, and made it her home. In 1896, Queen Victoria, who was Sophia’s godmother, gave her Faraday House in Hampton Court as a ‘grace and favour’ home, and it is here that she lived for most of her adult life (Making Britain).

She became a key figure in the campaign for women’s suffrage, and was a close friend and ally of the Pankhursts. Present at all the major rallying events, and often to be seen selling copies of The Suffragette near her home, she was particularly instrumental to the ‘no taxation without representation’ strand of the suffragettes’ civil disobedience strategies. After the death of Emmeline Pankhurst in 1928, Sophia was elected to replace her as President of the Suffragette Fellowship, an organisation of which she remained a member for the rest of her life.

There is something utterly charming about the letter, held by the British Library, to Lord Crewe from a staffer getting clearance to respond to a complaint about the Princess:

‘Sir William Connington telephoned to me about this picture which appeared in this week’s Suffragette. He asked “if anything could be done to stop her.” We have no financial hold over the Dhuleep Singh Princesses, but of course it is for the King to say whether her conduct is such as should call for her eviction from The Lodging she now enjoys in Hampton Court by his Majesty’s favour.’ 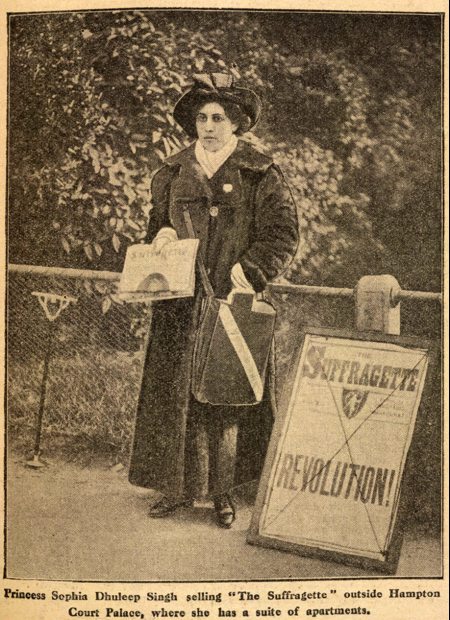 The newspaper image in question

A more extensive history, with some wonderful historic material, can be found at A Little History of the Sikhs.

A excellent site for school students is History’s Heroes, which has stacks of information and resources about the Princess, including historic context and prompts for further thought and projects.

There is a biography by Anita Anad, Sophia: Princess, Suffragette, Revolutionary. I just ordered one, and when it arrives, I’ll begin work on the screenplay.