Author: Cara enjoys reading, blogging, discussing politics obsessively, learning, making fun of celebrities that aren’t really all that famous, hanging out with her husband and cat and spending unhealthy amounts of time on the internet. You can read more about her at The Curvature. 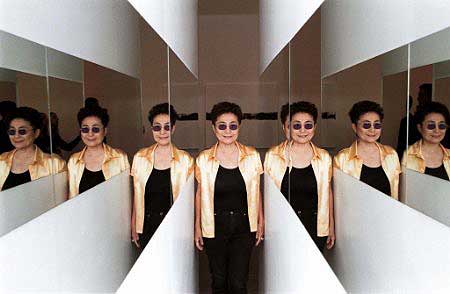 When Tigtog and Lauredhel asked me to introduce Yoko Ono as a Friday Hoyden, I was thrilled. I’m an avid reader of Hoyden About Town, and if anyone deserves hoyden status, I’ve always thought that it should certainly be Yoko.

I was asked to write the introduction because of my recent five-part blog series that analyzed Yoko Ono as cultural phenomenon from a feminist perspective. It begins here. There reasons that I think she’s a hoyden are all in there, along with much, much more on how just about everything you’ve ever learned about her is wrong. The series has been successful beyond my wildest dreams – up to and including praise from Yoko herself.

I had this series milling around in my brain for some time before I actually wrote it. Years, probably. It popped into my head every time I read a book about my favorite band the Beatles (I’m obsessed), and inevitably saw Yoko reviled as the evil conniving woman who drove the group apart. It came up every time someone reacted with disbelief upon learning that I love both the Beatles and Yoko Ono. I considered it every time I heard a ubiquitous anti-Yoko joke. And yet finally, it was reading Bob Spitz’s biography The Beatles that was the last straw. The book features heavily in my series for a reason. It not only took the hatred and lies about Yoko a step too far by presenting them as fact in a supposedly comprehensive and unbiased book — it also did a great job of gathering the large multitude of lies all in one place, and accidentally exposing the misogyny and racism behind them.

Part One was probably the most fun for me to write, as it goes heavily into Beatles history, and explains why exactly Yoko didn’t break up the band. But I probably like Part Two and Part Three the best, which respectively go into the falsehood, racism and misogyny behind the idea that Yoko was using and destroying John Lennon, and how her failure to live to standards of femininity/womanhood drove the vitriol surrounding her public image.

When Yoko Ono herself eventually emailed me to thank me for the series and express how impressed she was at its accuracy, it’s no exaggeration to say that it was one of the greatest moments of my life. Though there are many things on which I disagree with her, she is my favorite feminist and my favorite artist (who just so happened to be married to my favorite musician). She’s also my biggest living hero.

I don’t know how she found the series. But all along, I had hoped against hope that she might read it and believe that it did her justice. It was the world’s biggest honor that she did, and that she felt the need to reach out to me about it. And it was an additional honor when she felt compelled to reproduce the entire series at her own website, Imagine Peace. I hope you like it, too.