We still don’t know when it will air (although there are lots of whispers pointing to June), but the BBC last week released a 60 second trailer for Series 3 of Torchwood, which will consist of five hour-long episodes aired over consecutive nights on BBC1.

For those of you with dial-up or otherwise dodgy internet connections, beccaelizabeth has a transcript. And because the transcript doesn’t cover the bits with just music and no dialogue, there are some not-too-big screencaps below the fold. 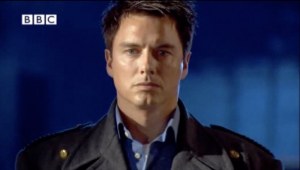 Life, Doctor Who, and Combom has a badly punctuated (oh, how I weep for the missing apostrophes) summary of all “official” spoilers released to date.

In comments, please limit yourself to discussion of the preview and official spoilers from the Combom post — if you know of any other spoilers, keep a lid on it, eh?

Like Loading...
‹ Ebooks, pleasure reading, and the planet
This is the first of no doubt many occasions that I will utter my husband’s new perfect curse ›