Aiming to please everybody won’t work

Via Ophelia Benson, Ellie Mae O’Hagan riffs off her first reading of Betty Friedan’s The Feminine Mystique at The Guardian‘s Comment is Free: Feminists can be sexy and funny – but it’s anger that changes the world

For a long time now, feminists have been told that their message will never spread to the masses if the messenger appears to be an angry man-hating lesbian shouting the odds from a gender studies seminar room. But we need to realise that popular, non-threatening feminism is destined for failure as well. In a patriarchy – and if you are a feminist, you accept that we are living in one – what is popular and non-threatening is what men deem to be acceptable.
[…]
Feminism that prioritises popularity over its own integrity will necessarily fail, as it is bound to reproduce the very problems it is fighting against.
[…]
Friedan changed feminism because she wrote a book that spoke to women’s hearts and souls, and wasn’t afraid of offending men in the process. An 82-year-old woman wrote in the New York Times this week that The Feminine Mystique had made her realise that she was “not a freak” for feeling a sense of malaise. Women today are becoming angry at being made to feel like freaks for feeling malaise at being cat-called, objectified and shamed. The goal of feminists must be to harness that anger to create something better, not stifle it with a feminism which pleases everybody but changes nothing.

As O’Hagan outlines Friedan’s most salient points and examines how the book was originally received and argued for and against, she compares and contrasts it with how the arguments of today’s feminists are being received and counterpointed from both within and without the feminist movement. It’s fascinating on one level, and deeply wearying on another, to see the same old anti-feminist and anti-activist backlash arguments keep on being played out, in yet another go-round of objections to appeals based in social justice for redressing sexist and other imbalances of opportunity/representation. Most visibly online right now it’s happening in geek groups and atheist/skeptic forums (which overlap extensively with online (g)libertarianism, which massively multiplies the entrenched backlash). 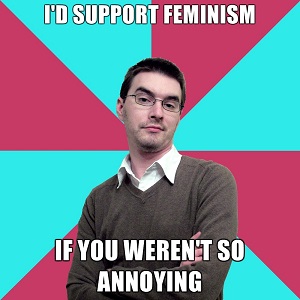 Those arguments basically boil down to it doesn’t happen to me/I don’t see it happen around me therefore you must be exaggerating or lying – and when the exasperated why would we lie about this? response is made then out come the claims about radical manhating and working towards a matriarchy. If they grudgingly back down from that hyperbole it’s then that the but if you were just not so strident then people* would take you more seriously card is played. (* by people they obviously mean men)

This leads me onto another summary of a not-new book scrutinising dismissive arguments against gender analysis similar to those highlighted by O’Hagan, (also via Ophelia Benson). Michael Kimmel’s The Gendered Society (2000) (which I haven’t read yet but of which I hear many good reports) is quoted as noting that it wasn’t until women’s liberationists in the 1970’s raised their voices against sexism that sociologists even formally recognised gender as one of the prime axes of social status/oppression:

We now know that gender is one of the central organizing principles around which social life revolves. Until the 1970s, social scientists would have listed only class and race as the master statuses that defined and proscribed social life.
[p5]

The central thesis of Kimmel’s book, per Benson, is that the dynamic interplay between difference and inequality does not work in the way that the status quo defenders argue – they say that difference leads to inequality (If you just weren’t so darn different we could treat you equally! But you are really very different, so that just wouldn’t be right.), however Kimmel argues that is the presumption of inequality that leads to the insistence on empirically significant differences. Benson also quotes a most illuminating exchange from the ’80s between a Black woman and a White woman about what we are conditioned to see when we look at ourselves in the mirror in terms of our differences from the presumed normal in our societies – our social privileges determine what we see as important differences and what we see as inconsequential differences, and what is socially accepted as the most important differences are those that visibly mark race, gender and class.

This is what ties Kimmel’s work into O’Hagan’s post on Friedan and funny/sexy feminism most clearly for me – the crucial importance of making our malaises visible and our analytical terminology recognised as part of the required vocabulary for serious discussions (note the pushback against the word ‘misogynist’ from people who use none of the same arguments against the word ‘misanthrope’).

The more some feminists try to be popular/pleasing (as women are expected and conditioned to be), the more complicit those feminists will find themselves needing to be with not calling out the difference myths of the status quo for the distortions they are, and the more the world will never change. That this is one of the crucial points of contention between the mainstream feminism and the womanist movements is no coincidence; it exemplifies exactly how those same old arguments against being too strident etc work to persuade some groups of women better than others precisely because of the differences from the normative which they see (or don’t see) when they look in the mirror.

So let’s harness our anger and take it out for frequent noisy gallops.