With the news of the death of Nelson Mandela, for the next while there will be many reflections published on his life and its impact. It is worthwhile to take some time to think of one of the people who will be feeling his death most keenly, his wife Graça Machel.

Graça Machel and Mandela married  in 1998, but they had already been a couple for some time. Archbishop Desmond Tutu famously chided them for living in sin, though one would think that a woman and man in their fifties and seventies might be granted dispensation from the trappings of ceremony, as long as they wished. The three of them founded the humanitarian group The Elders, which assembled a remarkable group of leaders, and continues to do extraordinary work in campaigning for social justice, equity and sustainability all over the world.

Machel served as Minister of Education and Culture in Mozambique from 1975 – 1989. She has been one of the people to work most tirelessly to bring to the world’s attention the harm done to children raised in situations of armed conflict. She was commissioned by the United Nations to write an extensively researched and ground-breaking report on this, which became the book The Impact of War On Children. Unicef has a copy of the report on their website, with many annotations and additional documents. These days Machel works particularly intensively in campaigns against child marriage. She was the founder of the Foundation for Community Development in Mozambique, and has a long history as a leading campaigner for the rights of women and children.

In recognition of her lifelong efforts to promote human rights, education and development, Graça Machel has received the Laureate of Africa Prize for Leadership for the Sustainable End of Hunger (1992), the Inter Press Service’s International Achievement Award (1998), the North-South Prize of the Council of Europe (1998) and the Africare Distinguished Humanitarian Service Award (1999), among others.

She is obviously a great spirit, and must be very sad at this time. 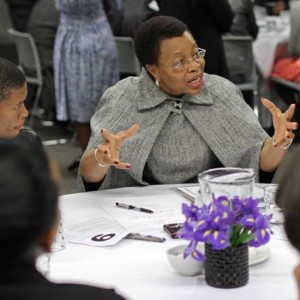 Graça Machel at a Youth Event in Mozambique.