Home › Culture › education › Lego is Refusing to Get the Message

Lego is Refusing to Get the Message

Someone at Lego has decided that they will make more money from parents who like gender segregation and stereotyping than those who loathe it.

I’m sure by now you’ve seen this advertisement from 1981. 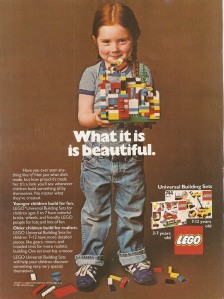 Well, this is from the latest catalogue. Circa 2014:

From the current Lego catalogue

That’s six children clearly coded to be seen as boys, and one equally clearly delineated girl.

With absolute predictability, the sole girl is there to promote Lego ‘Friends’, the line developed specifically to target girls, which is saturated in pink, full of pre-formed pieces that make only one thing (which usually has something to do with shopping), and human figures who compare to the standard ‘minifig’ like this: 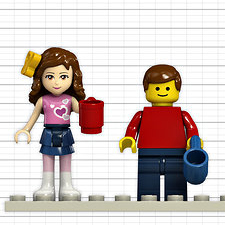 The label “especially for girls” puts paid pretty effectively to the naive assertion that boys can always buy the pink things if they want them.

Even in the 1 1/2 – 5 years category they seem to have gone out of their way to code the toddler as male, at an age when it would have been easy to choose and dress a child in such a way as to present as either gender. Instead the stripey black t-shirt and messy hair tells us ‘boy’. Girls in ads don’t get to look so casual.

If girls stop playing with Lego once they reach school, maybe it’s because they’ve absorbed the message by then that it’s not supposed to be for them. Or their parents aren’t buying it because everything they see attached to it suggests it’s for boys. It is utterly disingenuous to claim a need to modify the product to appeal to girls when the company is not even attempting to make girls feel included in advertisements for the unmodified version. This is a company that knows its marketing better than just about any other. They know that they could promote ‘regular’ Lego to girls, and they know they’re not doing that.

With all the consumer feedback Lego has been getting there is no way that the people who put these pages together aren’t aware of what they’re doing. It would take no effort at all to think of dressing the children so they read in a less gender-defined way, or to have half the pictures show boys and half girls, or even (imagine!) to put two children in each picture and let us (shock!) see a boy and girl playing together. This is starting to look awfully like a strategy consciously designed to cater to parents who prefer their boys to play one way and their girls to be kept far, far away from that.