Home › Culture › The writer and the cartoonist

The writer and the cartoonist

Helen writes at the Cast Iron Balcony. She’s a blogger, she’s a grinner, she’s a mother, she’s a sinner. She plays her music in the sun.

Last year, some cartoons which appeared with two of Miranda Devine‘s articles caught my attention. One article (they’re both in the SMH, as always) is about feminists – they all hated Sarah Palin ‘cos they’re nasty. The other is about cougars. You know- women of a certain age who are desperate to partner.

In the Sarah Palin vs. feminism article, Devine asserts – and I hope you’re not eating breakfast while you read this – “in her brief starring role on the global stage [Palin] has been a powerful psychic enema, flushing out the poison at the heart of establishment feminism for all to see.” Now newcomers to Devine World will be saying “But, Sarah Bernhardt and Kathy Lette are not exactly spokespersons for feminism. And US feminists defended Palin against sexist commentary while a lot of male commentators wallowed it it”. Well, Devine is Strawfeminists R Us, so let’s not waste too much time on her under-researched opinions. 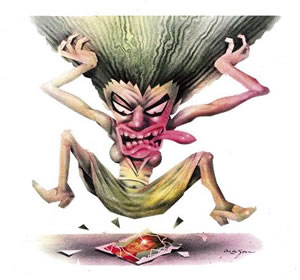 What intrigued me was the cartoon; it’s so over the top. Well, the “feminist” depicted isn’t the Full Stereotype, judging by the heels and dress, although the hair looks as if it’s long and grey – an absolute no-no for Western women- but the depiction of the “feminist” is so, for want of a better word, hectic. Mad, tongue lolling, muscles like a skinned rabbit; Over-coloured, gesticulating wildly, jumping up and down on the face of the hapless Palin.

Hmm. Now for the other article, about cougars in the city of Sydney trying to find love. Miranda begins with the well-worn old starting point that women aren’t partnered these days because they’re too damn fussy, then points to one of those risible “statistical surveys” that our MSM love so much, suggesting that these fusspots should simply move to different suburbs to beat the odds. But! that doesn’t mean they should be, god forbid, calculating, like her old School Chum from Ascham, who persists in having preferences (Devine refers to this as having a “shopping list”). Never mind that the demographer Bernard Salt, refers to men as “product”. 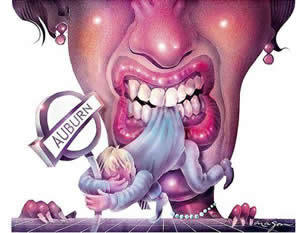 Here, the cartoon shows a woman who’s just doing femininity in an ordinary way: a nicer haircut, pearls, drop earrings, lipstick, manicure… but the image is, if anything, more terrifying than the picture of the “feminist”. The woman’s huge, over-life size teeth are actually chomping onto the tiny man. The poor, tiny, powerless man! This woman will eat you alive.

Because, remember, in the eyes of the lecturing Miranda, you’re damned if you’re feminist and damned if you’re not. (If women were so powerful and terrifying, why should they have to move house to find a partner?) The image says something else – men, some men, fear strong women. Really fear them.

I googled the cartoonist, and discovered he has a blog. Does he hate women? Far from it, if his blog is anything to go by. You can easily find other caricatures he’s drawn which don’t show the subject as fearsome or terrible. So, what gives?

Do cartoonists tailor their artwork to the piece of writing it’s going to be published with, or does the writer exhort the artist to make an image nicer, naster, scarier to fit what they’re saying? I can’t work out why these images are so horrible; they don’t really jive with the artist’s whole body of work.

As I said, no particular reason for this post except that I realised how little I know about the mechanics of articles-with-cartoons and whether, or how, the writer and the cartoonist communicate to put across the message. I’d be interested to hear from any cartoonists if there are any reading!

Crossposted at the Balcony