So many conservative right MPs in the Coalition government definitely do not want to hear that their demonising of Islam and dehumanisation of Muslims is actually helping ISIL/Daesh rather than hurting them. How dare a security and intelligence expert tell two (a whole two! neither of whom personally complained!) Liberal MPs that it would be a good idea to tone down their anti-Muslim rhetoric?

NAOMI WOODLEY: Some Coalition MPs have raised concerns that this is the ASIO boss involving himself unnecessarily in the political debate. Do you see it that way?

ALLAN BEHM: No, not at all. I don’t think terrorism and counter-terrorism is a political debate at all. It’s alright for politicians to talk about the politics of it but ultimately it is a profound social issue which has got law enforcement and intelligence dimensions to it.

And I think what the director-general of ASIO quite properly is doing is recognising that there are social policy factors at play here and he’s seeking to make sure that those who do have an interest in managing the problem of the alienated youth who might want to support ISIS or Da’esh, people who do want to get into that game do so in a way that don’t complicate the matters that the director-general has got to deal with.

So I think it’s perfectly reasonable for him to ring up people and if they’re saying things that may be don’t help well then I think it’s a good thing that he tells them that and maybe suggests to them how they might sort of rephrase or re-comprehend their stuff and equally if people are sort of on the spot and saying things that are really good, I’m sure he’d ring them up and say hey more of that please.

Some escalation of Islamophobia links: 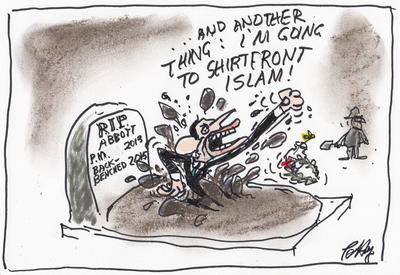 What does the Paris climate agreement mean for Australia? https://t.co/rJz0lR3Gbb #auspol @COP21

We asked for your help to analyse the #TPP. Here are the answers to your questions: https://t.co/dipQlMe7Or #auspol pic.twitter.com/hBZ7azLtUV

LIB LOGIC: Make healthcare commercially competitive, so ppl having a heart attack can shop around for the cheapest heart surgeon. #auspol

Victoria welcomes the first Syrian and Iraqi #refugees to arrive as part of 12,000. #auspol https://t.co/tarO4mZ93y pic.twitter.com/3hqX4fg8xm

As usual for media circus threads, please share your bouquets and brickbats for particular items in the mass media, or highlight cogent analysis elsewhere, on any current sociopolitical issue (the theme of each edition is merely for discussion-starter purposes – all current news items are on topic!).