Home › Culture › arts & entertainment › From the Fine to the Ridiculous

From the Fine to the Ridiculous

No, I’m not dead, and no, the Grog’s Gamut fiasco hasn’t made me give up blogging about the patriarchy and the rest of the kyriarchy in favour of talking about shoes. Life has thrown more work at me lately than I can cope with, and I’m going around with my head bulging with posts I have no time to write. 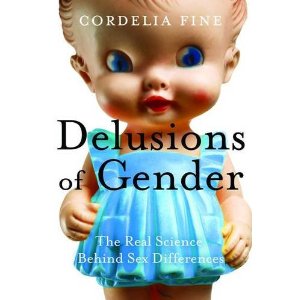 Delusions of Gender by Cordelia Fine

A Balcony reader has nudged me to put up something about this article in last Saturday’s AGE by Cordelia Fine, and yes, the writing of this very fine psychologist and academic (yes I know, hilarious, I’m sure that’s never been done before) need to be disseminated far and wide, in fact, hammered into the heads of all the nouveau-essentialists, in the media and out of it, with a giant cluebat. Here are some quotations from the article by Suzy Freeman-Greene:

At one point in Delusions of Gender, for instance, she writes: ”It is appalling to me that one can, apparently, say whatever drivel one likes about the male and female brain and enjoy the pleasure of seeing it published in a reputable newspaper, changing a school’s educational policy or becoming a bestseller.”

…(T)hree years, ago when [son] Isaac was at kindergarten, Fine discovered his teacher reading a book that claimed his brain was incapable of forging the connection between emotion and language. ”And so,” she explains in Delusions of Gender, ”I decided to write this book.”
The teacher was reading Why Gender Matters by US physician Leonard Sax. An influential campaigner for single-sex education, Sax once claimed that the areas of the brain involved in language and fine motor skills mature about six years earlier in girls, while those involved in maths and geometry mature about four years earlier in boys. Fine dismisses such ”neurononsense” and quotes American linguistics professor Mark Liberman’s description of Sax’s use of scientific data as ”shockingly careless, tendentious and even dishonest”.
What did she say to her son’s teacher? ”I explained to her that this was not a scientifically valid claim. And she was very responsive to it.” The exchange, she says, sparked the teacher’s interest in the issue.

Read the whole thing. This is where the academic rubber hits the social change road.

On the other hand, Elizabeth Farrelly, who, unfortunately, is a regular in the Fairfax opinion stable, says anything about gender that pops into her head!

(The BER project is)…a Gillardist fem-coup to make the Rudd assassination pale in comparison. Or, more sinister yet: a Third World plot to effeminate the West.

…Now that almost every school has a major chunk of its ”open” space fenced and scaffolded, what will give?
Boys, and boy-ness, for a start. As even boisterousness becomes frowned-upon and the fighting that is bound to erupt in such pent conditions becomes punishable by that boys’ own worst-possible penalty, endless hours of raking-it-over talk, just being a boy becomes a problem.
The incentive is to stay static, watch the screen, make like a girl, gossip, get fat. Which is where the double whammy kicks in. Estrogen.
Double whammy, double mammy. For not only does estrogen generate fat; fat also generates estrogen. Add this feedback loop to the xenoestrogens already ubiquitous in the environment and you have a very interesting development in endocrine politics.

Yes, it goes on, and yes, it’s all as hateful as that or worse. (Notice there is material for a whole other post on fat hatred in there. It’s an all-round trainwreck.)

Cordelia Fine holds a PhD in neuroscience, is a Senior Research Associate at Macquarie University, Australia, and an Honorary Research Fellow at the Department of Psychological Sciences at the University of Melbourne, Australia. Elizabeth Farrelly used to be an architect. I have no idea why Fairfax consider Farrelly qualified to witter about absolutely anything and everything in the opinion pages. Oh, yes, I forgot – women who seem to hate their own gender are always given a megaphone in our media.