Repost: Nice Guys (TM) redux and what makes an ideal husband and father

This post was originally published in 2007, and is getting a lot of hits all of a sudden (presumably there’s yet another Faux-Nice-Guy rant getting some kickback out there on the interwebs). I’ve decided to repost it so that some of the new readers (and veteran Hoydenizens too!) can discuss the post if they want to. 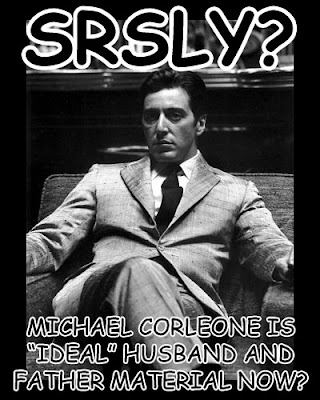 Over at Feministe, Jill dissects a particularly loopy column/movie review from Jill Stanek (dialled up several notches even from her notoriously loose grip on what passes for analysis), where Stanek ends up in her column’s comments thread being reduced to claiming of Godfather II‘s Michael Corleone that “as husband and father, he was ideal”, because he “didn’t drink, refused to womanize” (she argues for his ideal manliness because he is angry at his wife Kay for aborting her pregnancy, thus he is “pro-life”, thus he is a good man).

The Feministe commentariat dissect the idea of describing the cloying sociopathic possessiveness of Michael Corleone as being “affectionate and attentive” to his wife with all the ridicule that missing the entire point of the Godfather saga deserves, but there is a second important point, and commentor Deborah nails it:

the second-craziest comment is admiring Michael as a good husband because he doesn’t booze or cheat. Geez Pete, are their standards so low? He’s “ideal” because of that? My idea of an ideal husband has to do with love and kindness and attention, as well as, oh, say not murdering people. It’s an affirmative list, not just a list of crimes the husband doesn’t commit!

But that’s part of the anti-female rhetoric. If a husband doesn’t booze or cheat, a wife has no right to complain, because she has no right to human decency as long as these major lines aren’t crossed.

She’s just hit the nail on the head with what bothers me about the Nice Guy (TM) rhetoric, those whines from some men about how it’s so unfair that women won’t flock to be with them when he’s a “decent” bloke who doesn’t do nasty things to women, and what more do they want? Well, colour us as unreasonably demanding, but women do tend to want a little bit more than a guy who simply refrains from being nasty like it’s some great sacrifice (which implies that he might just stop refraining from being nasty if he doesn’t feel appreciated enough, so watch it).

Not doing nasty things to women is the lowest bar to hurdle, it’s the basic standard for being someone women don’t actively seek to avoid, it’s not all that’s necessary for women to find a man trustworthy and likable. A man who doesn’t commit crimes against women may simply be a man who is unwilling to risk being caught rather than being a man who would never dream of enjoying such a thing, and if a man does not have that basic empathy and respect for women it shows.

As Deborah says, an ideal man affirms women in his interactions with them, he doesn’t feel entitled to congratulations and rewards simply for not being horrible. Not being horrible is the basic standard for being a good citizen, it doesn’t entitle anyone to special doe-eyed regard. A Good Man doesn’t just not bash or not rape or not murder women, he is also a kind and thoughtful person who is interested in women as people and not just bodies.

Blatant “players” can still be Good Men if they are kind and thoughtful and interested in the women they are charming into their bed without making any false promises, while men who desperately want to be married can still be just wearing Nice Guy(TM) masks if all they really want is the convenience of wifely services rather than a partner they genuinely find to be an interesting person whose opinions and desires they respect. Being a Good Man is really not all that high a bar, although it is definitely higher than the Jill Stanek ideal of not-a-drinker and not-a-womaniser. Be kind and thoughtful and interested in people, including women. That’s what makes a Good Man, and eventually the Ideal Husband and Father. All that needs to be sacrificed is a selfish sense of entitlement.