Home › Culture › arts & entertainment › BFTP: Is Vorkosigan as nasty as I love Lucy?

BFTP: Is Vorkosigan as nasty as I love Lucy? 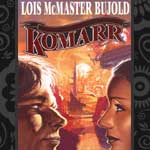 This is a repost: originally published in December 2005 at my original tigtogblog (later imported here to HaT) – where you can view the original comments. I’d only been blogging for a few months.

In a fascinating thread over at Pandagon riffing off a post by Twisty, the comments thread drifted away from Lucy to other fictional characters, and of course we eventually ended up in SF (as all righteous geeks must regularly do), where first Lois McMaster Bujold was swiped for her worlds by nolo (“why does every author of space operas assume that humans would escape the surly bonds of Earth just to found a bunch of feudal governments in space?”- a characterisation of the novels that I reject) and then Bujold cops it for anti-feminism by ledasmom:

To me, the most basically obnoxious occurance in the Bujold Vorkosigan books is the main character finally marrying, not only a woman “of his own class”, but a woman who’s practically a stereotype of the good, virtuous wife to her first husband. This is after he’s had numerous romances with women who are considerably more interesting. It’s not that the books as a whole are obnoxious … but they’ve become considerably less interesting since Bujold decided to provide conventional happiness to her protagonist and remove most of his major conflicts.

I think that’s a very unfair portrayal of the characters of both Ekaterin and Miles.

Miles longs for a strong, intelligent kick-ass woman (aka SIKAW), just like dear old mum. His problem has always been that although he has loved and been loved by several SIKAWs, the last place any of them want to raise a family is on restrictive, parochial, sexist Barrayar. He has been fed the “it’s not you, it’s Barrayar” line more than once.

The whole point of the Ekaterin-Miles pairing is that, alone of all her male acquaintance, Miles immediately recognises the residual spark of SIKAW spirit within Ekaterin, who has been so oversocialised as a Vor woman that she has dutifully throttled nearly all of her self in dependence to an immature passive-aggressive bully of a husband. The most admirable trait of Ekaterin is her core of integrity which finally leads her to refuse to take any more and decide finally to leave her husband, although she has no expectation of income or shelter even to support her decision.

She later foils a terrorist attack through pure determination and quick thinking despite knowing that she may well be sacrificing both her own life and her aunt’s. Considering that unlike Miles’ previous inamoratas she had no martial expertise to draw upon, this makes her a more impressive character than the overt warrior-maids, not less.

Bujold’s examination in Komarr of Ekaterin’s subjugation to her first husband, her repulsion by it and mourning of how she seemed to be slowly dying inside is one of the most revealing character studies of a woman trapped inside the patriarchy that I have ever read. To dismiss her merely as “the good, virtuous wife” without acknowledging how she struggled within the trap of that role and eventually rejected it triumphantly seems grossly unfair.

The later tensions between Miles’ desire for her, her wish for autonomy, the competing claims of a rigid class structure amid the machinations of politics are scarcely anti-feminist, either. Space opera’s gotta have some romance, no? Sure, she ends up marrying the rich guy with the castle, but not before both he and she know that she can make a generous living off-world.

It has been well established in the previous books that Miles, because of the sacrifices that his parents made for him against all Vor social expectations by accepting and encouraging him as a perceived mutant to take his place in Vor society, is incapable of setting all his parents’ work for naught by abandoning Barrayar for a freer life in wider galactic society, although he has proved himself more than capable of doing so.

To do that would betray all their work for decades attempting to drag Barrayar out of feudalism, work that he passionately agrees is necessary and wants to do his Vor dynastic duty by through raising lots of little Vor to help in the great work. Miles is bound by duty and honour here, and although he has ended up making the decision independently to confine himself to those bounds, they still chafe.

This may well be where some readers start to find Miles less interesting – instead of the honour-duty-rebellion lemmas of a young man finding himself within the shadow of a “great man” father, Miles is now fully adult and dealing with larger political issues of social engineering from a position of power. Everybody can relate to the angst of adolescence and finding a fully adult role for oneself in relation to one’s parents, but most of us are less familiar with the special agonies of choice that come to those wielding real power, and perhaps less compelled by it. I find it fascinating, but tastes vary.

You may well be repulsed by Miles’ decision to stick with the dynastic shortcomings of Barrayaran society when he could be gallivanting egalitarianly around the galaxy in time-honoured space operatic fashion, but it is an honorable and admirable decision in light of his determination to reform aristocratic privilege and parochial sexist traditions. It is almost inevitable that the only woman he would eventually find willing to share and wholeheartedly contribute to that goal for social change would be a fellow Vor enlightened by suffering who shares his vision for a better Barrayar.