Ethics classes to be offered in SRE time in NSW 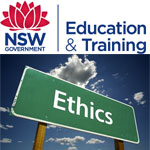 Ethics classes in special religious education time (SRE) are almost certainly going ahead in NSW, in 2011 at least.

Background: Special Religious Education (SRE) is a period of time, up to an average of one hour per week, during which students at public (government) schools receive instruction in religion from volunteer representatives of that religion. The parents of the child nominate which religion of those offered locally (in some but not all schools, this will be limited to Christian denominations, here’s the full list of approved providers). They can also opt to withdraw their child from SRE entirely, but if they do so the school can provide supervision but not alternative lessons:

11. Schools are to provide appropriate care and supervision at school for students not attending SRE. This may involve students in other activities such as completing homework, reading and private study. These activities should neither compete with SRE nor be alternative lessons in the subjects within the curriculum or other areas, such as, ethics, values, civics or general religious education. When insufficient teachers or accommodation are available, the school’s policy on minimal supervision will operate.
…
14. The principal retains an overall supervision responsibility for the conduct of SRE. Class teachers are not required to attend SRE classes, but may, with the agreement of the SRE teacher, assist or remain in the classroom.

An ethics alternative in SRE time was developed by the St James Ethics Centre. Their FAQs may be useful in understanding more about their classes and the background.

The report (PDF, 0.8MB) into the trial classes is available, and here’s some material from its introduction:

The findings of the evaluation demonstrate the effectiveness of the course in relation to improving students’ understanding and skills in ethical decision making, and the overall appropriateness of the course content, activities and resources and of the associated training. The evaluation also points to the success of the organisational model employed by the St James Ethics Centre, and considers the viability of this model for wider implementation of the course in NSW government schools…

The call for a secular ethics-based complement to SRE in NSW schools is not without precedent, and there is evidence here that secular ethics and SRE can exist respectfully side by side. In this evaluation an attempt has been made to assess the extent to which the ten week ethics pilot provides an appropriate model for an ethics-based complement to scripture, and to do so on the basis of rational argument and empirical evidence. Further decisions rest with the Minister.

There’s been some back and forth since:

I would, in fact, like him to be familiar with the history and teachings of the major religions in Australia. My own schooling was quite indifferent on that front. I attended Catholic primary and high schools, which do not have the SRE system: all students participate in scheduled classroom lessons on Roman Catholic beliefs. (In my experiences, not very robustly taught itself: the doctrinal positions opposing use of contraception came as a considerable surprise to my fifteen year old peers. “Bullshit, Miss.”) The secular state curriculum also seemed to lack much insight into religion or religious influences on culture and politics (and vice versa). The major exception was the Studies of Religion unit in Stage 6 (Years 11 and 12, the final two years); at my school we were offered a choice between a school developed religion course which would not count for university entrance, or the Studies of Religion course, which did. (Stage 6 has been considerably revised since, but this course is still available and you can see the present syllabus.) I attended Catholic schools for thirteen years without hearing about the split of the Democratic Labor Party from the ALP in 1955, for example. The ethics classes aren’t a cure-all for that hole in the curriculum, but they are not intended to be, nor should they be: that kind of material should be offered in the standard curriculum.

What do you think? If you have a child will you or would you have them attend the ethics option in SRE time? Will you or would you volunteer to be an instructor? (The website that is being built at primaryethics.org.au has contact details for would-be volunteers.) I am considering volunteering in 2012 assuming that the classes remain in place and that work and parenting commitments don’t make it impossible (as they likely will.)